3 city-owned buildings go on the market in downtown Georgetown 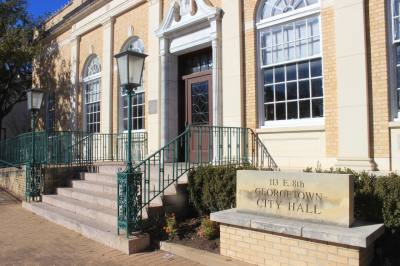 Georgetown City Hall is one of three city-owned downtown buildings up for sale.

With construction underway on the future Downtown West municipal center, the city of Georgetown has put three downtown buildings up for sale.

The city is accepting offers from potential buyers for Georgetown’s City Hall at 113 E. Eighth St., the municipal court and City Council chambers at 101 E. Seventh St., and the Georgetown Visitors Center at 103 W. Seventh St. All together, the buildings include more than 25,000 square feet of downtown commercial space zoned for mixed-use to allow for office, retail, restaurant, hotel or event facilities, according to the city.

The $13 million Downtown West project, which broke ground Nov. 26, will consolidate city offices in one location. The project will expand and renovate the city’s former library at 808 Martin Luther King Jr. St. to repurpose it as a new City Hall. At the same time, the Georgetown Communications and Technology building at 510 W. Ninth St. will be renovated to house the municipal court and City Council chambers.

The project is anticipated to finish before the end of 2018, according to the city.

In addition to getting good sale prices for the three buildings the city intends to sell, city officials said they are also seeking the best overall proposal for each property. Potential buyers must submit business plans and timelines indicating intended uses, according to the city.

Proposals are due by 2 p.m. May 1. Additional information, including instruction on how to submit proposals, is online at http://realestate.georgetown.org.

The city will also host open houses at each of the three buildings up for sale at 4 p.m. March 1 and 4 p.m. March 8.

The library will incorporate the new programs during the fall/winter of 2021-22. Until then, parents and guardians are encouraged to use the new Bright by Text service to access child development tools and information.

Williamson County stated judges may require masks in courtrooms at their discretion.