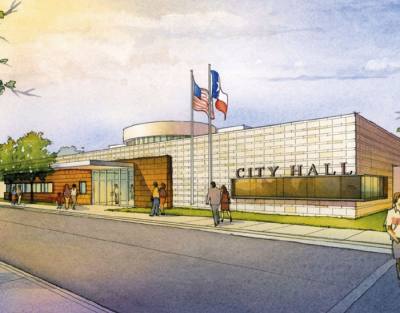 The $13 million Downtown West project is funded by municipal bonds, city fee revenue and the future sales of city-owned buildings in downtown Georgetown.

The Downtown West project will consolidate city offices into a civic center just off the Square. The $13 million project will expand and renovate the city’s former library at 808 Martin Luther King Jr. St. to repurpose it as a new City Hall. At the same time, the Georgetown Communications and Technology building at 510 W. Ninth St. will be renovated to house the municipal court and City Council chambers.

City officials and community members celebrated the start of construction on the Downtown West project with a groundbreaking ceremony held Nov. 26.

Renovation of the new City Hall complex is anticipated to be finished before the end of 2018. The city’s current visitors center, City Hall and its council chambers and municipal court will be sold for retail or commercial use. A request for proposals for each facility will be released in early 2018, according to the city.

Kilwins opens its doors on the Square in downtown Georgetown