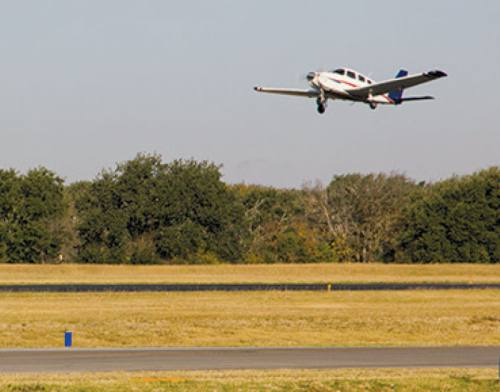 A plane takes off from the Georgetown Municipal Airport, which is expected to update its master plan in 2018.

In 2017, Georgetown’s general aviation airport began exploring updates to its master plan, which was last revised in 2005. Near-term improvements that could be considered over the first five years of the updated plan include a variety of projects meant to bring the airport into compliance with modern Federal Aviation Administration design standards, according to Airport Manager Russ Volk. Intermediate-term projects include a proposal to lengthen the airport’s main runway. Some residents living near the airport are concerned that the expansion of the airport could bring negative effects to local environmental health and property values.

The airport’s revised master plan will require approval from the city’s transportation advisory board, Georgetown City Council, the Texas Department of Transportation and the Federal Aviation Administration before it can be finalized. A draft version of the master plan will likely begin moving through the final approval process in early 2018. Volk said available funding from local and federal sources will drive any additions and expansions to the airport. On Jan. 12, the FAA instructed the city of Georgetown to put a hold on the master plan update process until FAA officials can review aviation growth data and provide comment.