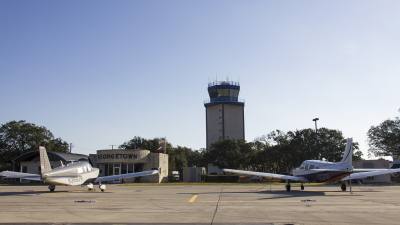 The Georgetown Municipal Airport is in the process of updating its master plan.

The Federal Aviation Administration has instructed the city of Georgetown to put a hold on updating the master plan for the city’s airport until FAA officials can review aviation growth data and provide comment, Georgetown Airport Manager Russ Volk said Friday.

Georgetown’s Transportation Advisory Board was set Friday to consider whether to accept a draft version of the airport’s master plan update. The item was pulled off the agenda at the beginning of the board's meeting.

Volk said FAA officials contacted the city by email to have the master plan update halted. He did not know how long the FAA would need to complete a review and make comments.

“In reality, I consider this a positive thing,” Volk told board members. “I’d rather get (FAA) input prior to city consideration.”

The airport needs FAA approval—along with approval from the transportation advisory board, Georgetown City Council and the Texas Department of Transportation’s aviation division—before the draft update is official.

Coffman Associates, a Kansas City, Missouri-based consulting firm selected to complete the airport’s draft master plan update, released a recommended development plan and capital improvement program in November 2017 that lists 52 projects with an estimated cost of $59.6 million to be considered at the airport over the next two decades. Of the estimated cost, 84 percent could be eligible for federal aviation grant funding, according to the firm.

Proposed projects include lengthening the airport’s main runway, which runs north-to-south, by 500 feet on both ends, bringing its total length to about 6,000 feet.

Another proposal would extend runway protection zones beyond the airport’s property line on either end of its main runway. Extending the zones would require the airport to use FAA money to purchase and demolish several dozen homes outside of the airport’s existing property lines.

On Friday, several members of Airport Concerned Citizens, a Georgetown citizens group that has called for the airport to undergo a full environmental assessment through the National Environmental Policy Act, spoke to the members of the transportation advisory board.

ACC member Wendy Dew told the board that city officials should organize a public workshop to allow for further public comment on the proposed update’s effect on economic, social and environmental impacts. Dew said she thinks the update process, which began in 2016, needs more opportunity for public comment.

The city held three public workshops on the update process in 2017 and has been accepting comments online at www.georgetown.airportstudy.com. The draft plan and other associated information are also available on the website.

Rich Gottleib, also an ACC member, said he is concerned that data included in Coffman Associates’ draft update for the airport has inflated benefits of expansion while downplaying negative effects or alternative options.

“This whole process has been an example of crony capitalism; the benefits go to the few, while the cost goes to the many,” Gottleib told board members.
SHARE THIS STORY