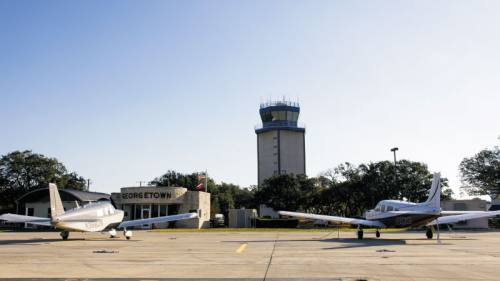 Some residents concerned with effect of airportu2019s growth on nearby neighborhoods

The Georgetown Municipal Airport has seen an increase in air traffic since its master plan was last revised in 2005, and Airport Manager Russ Volk said the facility’s guiding document is overdue for an update.

But some residents living near the airport have raised concerns about negative effects the busier activity could have on environmental health and property values.

The airport counted 97,346 takeoffs and landings in 2016, a 28 percent increase from the previous year and the highest annual total since the airport’s air traffic control tower first came online in 2008, according to data in a draft master plan update.

“The airport’s experiencing a growth spurt just like the city of Georgetown and the whole Central Texas region,” Volk said.

In November, the Kansas City, Missouri-based consulting firm Coffman Associates, which was selected to complete the airport’s draft master plan update, released a recommended development plan and capital improvement program that lists 52 projects with an estimated cost of $59.6 million to be considered over the next two decades. Of the estimated cost, 84 percent could be eligible for federal aviation grant funding, according to Coffman Associates.

The documents released in November were the final components of a master plan update process that began in 2016 and included reports on aviation demand forecasts, airport development alternatives and other elements.

The draft plan can be found online at www.georgetown.airportstudy.com.

Volk said about $218,000 has been spent to complete the update process. Ninety percent of that money has come from Federal Aviation Administration grants through the Texas Department of Transportation’s aviation division, and the remainder has been paid out of the airport’s budget, he said.

Near-term improvements that could be considered over the first five years of the updated plan include a variety of projects meant to bring the airport into compliance with modern FAA design standards, Volk said.

That includes plans to reconstruct pavement and replace lighting on several of the airport’s taxiways, which planes use to move between hangars and the airport’s runways.

Intermediate-term projects include a proposal to lengthen the airport’s main runway, which runs north-to-south, by 500 feet on both ends, bringing its total length to about 6,000 feet. Volk said the lengthening would put the airport’s runway into recommended specification for the types of aircraft that use the airport today.

Patrick Taylor of Coffman Associates said during a Nov. 16 airport advisory committee meeting that the plan also includes a proposal to open the southwest portion of airport property, the area closest to Northwest Boulevard, to private development.

The area “is a highly marketable piece of land potentially for the airport,” Taylor said.

Georgetown’s airport will remain a general aviation reliever airport to the Austin-Bergstrom International Airport, so no commercial passenger service is proposed over the next two decades, according to the draft plan.

Some residents living near the airport oppose expansion plans.

Carl Norris, a member of the group Airport Concerned Citizens that has in the past called for Georgetown’s airport to be relocated, said the master plan update has renewed the group’s desire to see the airport undergo a full environmental assessment through the National Environmental Policy Act, the law enacted by Congress in 1970 that requires federal agencies to study environmental effects of their actions.

“We have never lost focus of what we have been after, which is a public input process with the environmental impact process, which would put [the airport] in compliance with NEPA,” Norris said.

The draft master plan outlines some potential environmental effects of new airport development but does not include formal studies. Individual projects, however, could require deeper assessment, Taylor said.

Georgetown resident Rich Gottleib, who said he recently moved into the Estrella Crossing neighborhood near the airport, said he is not convinced that the airport’s current use justifies the need for a runway extension. He added that existing operations at the airport are already negatively impacting some of the surrounding neighborhoods.

“It’s not just inconvenience and the noise; it’s going to be a loss in property value,” Gottleib said.

Another concern raised during a Nov. 16 public information meeting involves a proposal to extend runway protection zones beyond the airport’s property line on either end of its main runway, which would put the airport in compliance with FAA guidelines issued in 2012, Volk said.

Extending the zones, which is included in the draft plan’s long-term project recommendations, would require the airport to use FAA money to purchase and demolish several dozen homes outside of the airport’s existing property lines.

Volk said there is no recommendation to actively pursue acquisition of homes within the FAA zone, other than if somebody puts his or her home up for sale and there was federal money available to buy it.

“From all indications there’s not going to be an active push to go in and do mass purchases of homes and take them out,” he said.

Volk said before the plan is finalized, it would need approval from the city’s transportation advisory board, Georgetown City Council, the Texas Department of Transportation and the FAA.

He anticipates the plan will be ready to begin moving through that process as early as January.

“It’s not uncommon that a sizeable percentage of those don’t get funded because there’s just not enough money to go around,” Volk said.