AISD tries to learn from past as school closures draw near 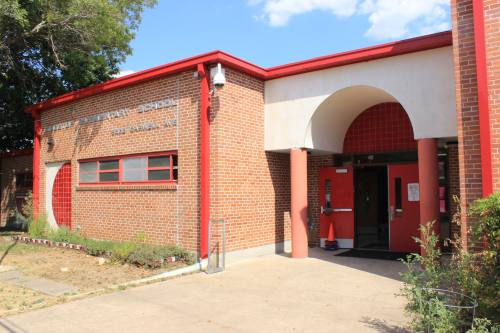 Ridgetop Elementary School in North Central Austin is one of 12 schools AISD staff have proposed closing in scenarios for closures, consolidations and programming changes released on Sept. 5.

As Austin ISD prepares to change where thousands of students will attend school and what programs are available, district leaders say they are dedicated to succeeding in balancing equity and helping low-income families, areas where they say they have failed in the past.

In the 1980s, when AISD was federally mandated to bus students across the district as part of a court-ordered desegregation policy, LaTisha Anderson traveled from her home near the then-closed Kealing Middle School to the Sunset Valley area of town.

Anderson, who now represents District 1 on the AISD Board of Trustees, said she remembers school assemblies in which students, predominantly white, danced to “Cotton-Eyed Joe,” a folk song with its roots in American plantations. Anderson said she remembers wondering why she was passing by so many schools on her bus ride, and said she knows what it is like to feel unwelcome.

“It has an effect on you,” Anderson said.

On Sept. 5, AISD released a draft of 39 individual scenarios for its ongoing school changes program, including 12 scenarios that would close current district schools.

The scenarios are not final drafts, and district trustees can choose to approve them all as a package or can pick and choose which to implement, AISD Community Engagement Coordinator Allie Ghilarducci said. Scenarios can also be changed before a scheduled Nov. 18 trustees vote based on additional community and trustee feedback.

Those scenarios show eight elementary schools and one middle school in Central Austin could close if approved by the board in November.

Nicole Conley, AISD’s chief of business operations and chief financial officer, said school consolidations will save the district $240 million in maintenance costs if all scenarios are approved, taking more than 5,000 classroom seats away in a district that has seen steady enrollment declines.

“Our buildings are becoming more costly to maintain as they age, with about $1.7 billion in deferred maintenance, not to mention that aging facilities don’t present the optimal learning environments for our students,” Conley told the AISD board of trustees Sept. 9.


Breaking down the scenarios

In addition to the closures and realignments, new programs would be added at Central Austin schools, according to the scenarios released Sept. 5.

Changes at the Central Austin elementary level would include a Montessori model at Winn Elementary School, including bilingual, bilateral and bicultural programming.

After the scenarios were released, Paul Saldaña, former AISD board of trustees District 6 representative, said he was “inundated” with calls and texts  from community members.

Saldaña, who grew up in Austin and served on the board from 2015-17, said he empathizes with the board members’ challenge, but community residents have told him the plans are missing concrete solutions to bridge the gap between low-income students and their more affluent peers.

“More work that needs to be done with boundaries and attendance zones, in addition to school closures. That would make it easier for people to swallow,” Saldaña said.

Seven of the 12 schools districtwide that may close have more than 90% of their students categorized as economically disadvantaged and include more than 90% minority students, according to district data, and all seven schools include students who live in East Austin.

This summer, AISD hired its first equity officer, Stephanie Hawley. Her role, Superintendent Paul Cruz said in June, is to identify where the district has done well in maintaining equity and where it has not succeeded.

Hawley said despite coming on board late in the school change process, she was involved in discussions, and she will do her best to make sure AISD is working for all its students.

“A lot of times we think of racism as neo-Nazis and Klansmen. We see that racism, but what we don’t see is the racism that we perpetuated. And I say we, all of us, regardless of race, because we inherited this system that doesn’t cause us to question what we’re doing to children,” Hawley said.

Gabriel Estrada is the assistant executive director for Austin Voices for Education and Youth, an organization that works with families in schools to make sure students are set up for success.

Around the same time Anderson was taking a bus to Sunset Valley, Estrada was bused from East Austin to Anderson High School. He said the district did not adequately help many families from his neighborhood, leaving them to cope with the challenges of traveling across the city and fitting into a new school community on their own.

AISD District 5 trustee Amber Elenz said trustees have learned from the mistakes of the past, and staff has followed through on promises to be bold and thoughtful in the school change process.

One proposed closure scenario for Pease Elementary School downtown has already drawn significant pushback from the community. Kris Garana, the president of the Pease parent-teacher association, said parents from all over the area, many of whom work downtown, choose to enroll their children in Pease because it allows them to spend more time with their children and be part of a school community.

“They have failed to make a case why Pease should close and how our children will benefit being relocated to another campus,” Garana said.

Conversations with communities will continue through November, with the next round of community engagement meetings scheduled from Sept. 23-Oct. 12. Public comment sessions will also take place at upcoming board meetings Sept. 23, Oct. 28 and Nov. 18.

Estrada, who has lived in Austin for much of his life, said community members who remember the mistakes of the past and feel economic pressure closing in want to be assured that this time, the district is working to include them rather than presenting another barrier.

“Families just want to know [AISD] is a place for them, and it’s a place that’s going to honor them. And that’s going to provide a stepping stone for their children to move forward in a positive way,” he said.