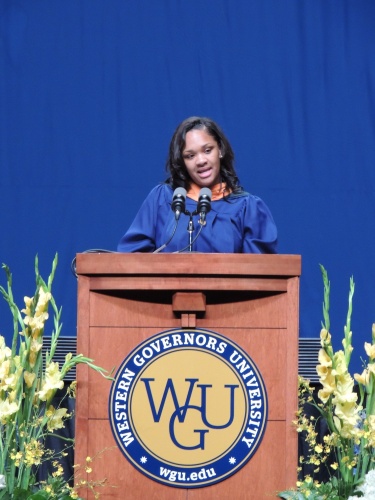 Latrivia Guinn, who received a Master of Science in Nursing degree from Western Governors University, addressed her fellow graduates at the University of Texas's Frank Erwin Center on Saturday, Aug. 18.

While most college students in Austin are coming back to school, Western Governors University—an online university intended to increase access to affordable education–celebrated 1,038 graduates at its regional graduation ceremony on Saturday at the Frank Erwin Center.

WGU was established in 1997 by a group of state governors to offer an online alternative for those seeking to complete a college degree. WGU Texas was established in 2011, and it now serves more than 11,000 students. According to the online college, 76 percent of those students work fulltime and 42 percent are first-generation college students.

Saturday’s regional ceremony for those who completed their online degree in 2018 included more than 700 Texas graduates. According to WGU, 91 percent of those graduates were age 27 or older, and 66 percent were classified as underserved in one of four categories–as the first generation in their family to complete college, an ethnic minority, a resident of a rural area or classified as low income.