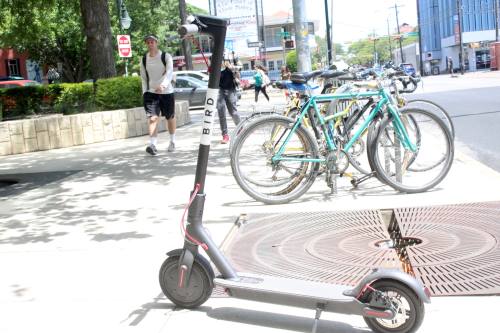 The city of Plano has added electric scooter rentals to an ordinance regulating bike-share activity on city streets and sidewalks.

Plano City Council on Monday approved the update to the bike-share ordinance it had first passed in February that required a permit to provide short-term commercial bike rentals in the city, adding e-scooters to the list of allowed vehicles.

“Observing e-scooters' use in Dallas, we’ve seen their popularity soar,” Plano Director of Special Projects Peter Braster wrote in a memo presented Monday to council members. “People are riding them to and from appointments, work, grocery stores and fun. Their introduction into Plano will give our citizens another choice for transportation.”

Three bike-share companies operated in Plano in February when the city passed its ordinance requiring a permit. Only one company, Lime, has completed the permitting process since then, according to the city.

The ordinance only governs companies offering e-scooter rentals. Individuals are allowed by law to own and operate e-scooters within the city without a permit. People with a regular driver’s license or permit are allowed to ride their e-scooters on streets with a posted speed limit of 35 miles per hour or less.

The ordinance update on Monday passed with the unanimous support of council members.