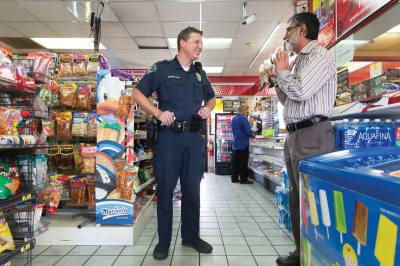 As Austin has continued to expand, its police department has had to learn how to service a rapidly growing city while its own numbers rise slowly, or not at all, according to Brian Manley, Austin Police Department interim police chief.

In the past five years the department has failed to meet its own response time goals for the most urgent 911 calls. Violent crime has risen in three of those years.

The Greater Austin Crime Commission, a public safety advocacy group, has raised concerns about the impact of a stretched-thin force on Austin’s economic vitality and its vulnerability during major events, which can concentrate officers downtown at the expense of other
neighborhoods.

Since December a series of events—Austin City Council’s rejection of a new five-year police contract, the expiration of the previous contract and poaching efforts by nearby law-enforcement agencies—has compounded APD’s staffing issues.

The city’s own metric of adequate policing is two officers per 1,000 residents, according to a 2012 review conducted by the Police Executive Research Forum. With the city of Austin’s population growing by 100 people each day, on average, according to the data from the U.S. Census Bureau, APD should hire a new officer every five days—or 73 every year—to maintain this ratio.

Since FY 2013-14, however, the city has only budgeted for an additional 62 sworn officers, according to the city of Austin’s annual budgets. APD struggles to fill even these positions. According to data obtained from the department, there were 56 vacancies as of press time.

While violent crime fell 1.1 percent in the 30 largest U.S. cities in 2017, according to an analysis by the Brennan Center for Justice at NYU Law School, in Austin it increased 2.9 percent.

In comparison the San Antonio Police Department, which serves a population of nearly 1.5 million people, or about 500,000 more than Austin, recorded an average response time of 6.6 minutes for all emergency 911 calls in 2017, according to a
spokesperson.


A timeline of the police contract process

According to state civil service law, Texas municipalities with at least 10,000 residents can negotiate contracts with law-enforcement agencies to determine pay, hiring and promotion procedures, accountability standards and other conditions of
employment.

In Austin these meet-and-confer agreements last five years and are negotiated by city staff and the relevant labor unions.

The Austin Police Association represents APD officers in these
negotiations.

“Because of the contract, this department has been transformed over the last 20 years to arguably one of the best in the country,” APA Vice President Andrew Romero said. “We’re not perfect, but we’re great because of that contract.”

Citing concerns about cost and accountability, Austin City Council voted unanimously Dec. 13 to reject a proposed new contract that had been negotiated over 10 months.

APA President Craig Casady attributed the decision, in part, to the uncertainty caused by the city manager vacancy. Spencer Cronk was appointed to the position after the contract vote.

The proposed contract would have cost an additional $82.5 million over five years. APD officers are the highest paid in the state, making nearly 14 percent more than the next highest-paid department. The rejected proposal, however, would have tightened the margin to 9.5 percent by 2021.

Without a meet-and-confer agreement to secure them, certain specialty compensations, including for mental health training or higher education achievements, and officer privileges during disciplinary processes are eliminated. Recommendations made by the city’s Office of the Police Monitor, a liaison between the APD and the community, are no longer publicly available, and the Citizen Review Panel loses access to investigation materials.

On Jan. 24 interim City Manager Elaine Hart suspended the panel until a new contract is approved. Farah Muscadin, the recently appointed Police Monitor, is able to continue investigations initiated before the contract expired.

“[T]he uncertainty of operating without the agreement and what the future may look like is, at a minimum, a distraction to officers,” Manley said.


Others are less affected

“In my opinion, the contract was so close to [state civil service law] that it’s not so different,” Austin Justice Coalition founder Chas Moore said.

Perhaps the most notable effect of the lapsed contract is a high number of retirements. Typically, eight officers retire in December, slightly above the monthly average, according to Manley. After the council vote, 33 officers retired, which he attributed to the benefits that were lost when the contract expired.

Some of those officers have moved to other police departments.

“I do know of a couple of police agencies that are already coming to Austin to actively recruit in an attempt to lure some of our officers to their agencies,” Manley said.

Williamson County Sheriff Robert Chody told Community Impact Newspaper he is not actively recruiting APD officers. However, a handful have applied for jobs in his department, he said.

The high number of retirees, prompted by the contract’s expiration, exacerbates the department’s staffing issues.

“How can we keep up with population growth if we can’t even keep up with attrition?” Romero said, meaning the new hires needed to replace retired officers.

In 2016 City Council hired Matrix Consulting Group to study community policing, a proactive method that requires officers to spend time in the communities they serve, building relationships and encouraging cooperation rather than only reacting to crimes.

One measure of community policing is how much of an officer’s time is uncommitted, such that he or she can get to know a small-business owner or play catch with a child, for example. The goal, according to Matrix, is 35-45 percent.

The Matrix study, however, recorded the overall level of uncommitted time within APD at 22 percent.

“During many hours of the day and in many areas of the city, proactive or ‘community engagement’ time does not exist,” according to the report.

“We’ve gotten as much as we can get in terms of efficiencies out of the department, in terms of dynamic staffing based on crime hotspots,” said Cary Roberts, executive director of the Greater Austin Crime Commission. “So really it just comes down to additional staffing.”

Joell Sullivan McNew, a public safety advocate, said that when officers retire the city loses their experience and expertise.

“Now we’re going to have new people who need to learn and be trained. And we’re still understaffed,” McNew said.

The city of Austin spends 70 percent of its annual budget on public safety, which includes fire and emergency medical services, and 40 percent on police alone. Renegotiating the contract presents the opportunity to rethink both.

The justice coalition, in a Jan. 3 memo issued to City Council, suggested that the money saved by the city during this period without a contract could be reallocated toward neighborhood lighting, a forensics lab, permanent supportive housing for the homeless, drug and mental health treatment and youth programs.

At the close of the Dec. 13 meeting, council members asked to be presented with a new contract by March 22.

On Jan. 29, the APA announced it was ready to return to the negotiating table once the city has reassembled its bargaining team.

While meet-and-confer contracts do not control the APD’s ability to hire additional officers, they do direct hiring standards and officer retention.

It is now up to city staff to renegotiate a contract that council members feel is affordable and holds APD accountable to the community it serves.

“Public safety is not an afterthought,” Roberts said. “It’s the first responsibility of government.”
SHARE THIS STORY

Housing Authority of Travis County staff are moving forward with mitigation efforts at the Rosemont apartment complex to assist those affected by Winter Storm Uri with relocating.

The proposal for the long-vacant 19-acre property off I-35 includes hundreds of new housing units, expanded park space and a retail center.