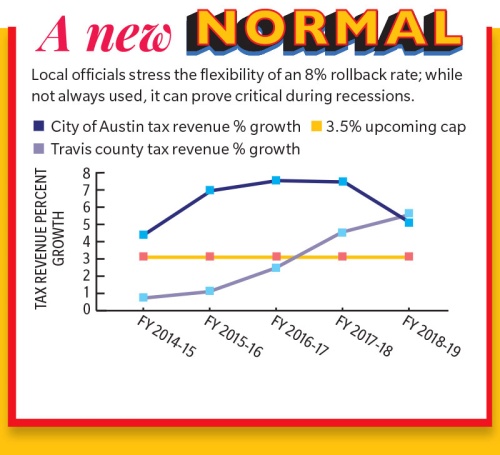 Local officials stress the flexibility of an 8% rollback rate; while not always used, it can prove critical during recessions.nnSOURCES: City of Austin, Travis County/Community Impact Newspaper

Previously, local governments were able to raise property tax revenue up to 8%—known as the rollback rate—before voter approval was required.

“When you look at what the law actually does, it’s pretty simple,” said Jacob Asmussen, Central Texas bureau chief for conservative group Empower Texans. “If a local government wants to raise your taxes more than 3.5%, they have to ask you.”

But local officials said the cap, when it takes effect in fiscal year 2020-21, will provide little relief to property owners while causing major cuts at the city and county, whose largest expenses are public safety and the criminal justice system, respectively.

Both sides agree on one point, at least.

As in most cities, public safety is Austin’s largest expense. Police, fire and EMS made up nearly 70% of the city’s operating budget in fiscal year 2018-19.

Council members have also approved a series of additional investments.

In June 2018, they voted to build five new fire stations in underserved areas by 2023 at a total estimated cost of $86.4 million.

In November, council members approved a four-year $44.6 million contract between the city of Austin and the Austin Police Association, a labor union that represents Austin Police Department officers.

Funding for both the contract and the staffing plan, however, was based on an assumed rollback rate of at least 6%, per city staff.

“[The cap] will make it harder for us to hire additional police, fire and other personnel as the City continues to grow and tougher to absorb annual cost increases in wages, rents and insurance premiums,” a city spokesperson said via email.

City staff are working to balance the budget before the cap takes effect to account for these commitments, which may include revising labor agreements, the spokesperson said.

APA President Ken Casaday said he is not worried about the current contract.

“The city’s continuing to spend a massive amount of money on homeless issues and housing,” he said. “So we certainly don’t expect to see a lot of changes [to public safety funding].”

Both Casaday and Austin Firefighters Association President Bob Nicks said they are concerned about future spending, however.

“Sometimes people take public safety for granted,” Nicks said. “If things are going well, then that’s a big part of the budget, and we just cut it back.”

But cuts can prove dangerous when demand for public safety services is high, such as during a wildfire or the series of bombings that occurred in Austin last year.

“When you start cutting things out, you reduce your capacity to flex and multiply yourself when you have a bigger event,” Nicks said.

Travis County is different from the city of Austin both in that it relies more heavily on property tax revenue—which made up 70.6% of its general fund in FY 2018-19, compared to 47.1% of the city’s—and it operates a smaller budget.

Over the last 30 years, the county’s median revenue growth rate has been 3.72%, which is fairly close to the new cap, Eckstein said.

But the county has approached the 8% rollback rate three times in that period—in 1993, 2000 and 2009—following recessions.

Economic downturns increase local government costs in two ways, Eckstein said. First, they typically correspond with a dip in new construction, which is a reliable source of new property tax revenue. Second, they increase demand for county services, such as utility assistance and—because crime tends to rise when the economy is bad—jails.

With the rollback rate at 8%, Travis County has been able to take a “just-in-time” approach to its budgets, Eckstein said, eschewing the need to build a large reserve because there is the option to raise revenue in times of crisis. “But that sort of flexibility is going to be gone now,” he said.

Travis County is mandated by the state—and the U.S. Constitution—to provide indigent defense.

Currently, the county contracts private attorneys to represent indigent clients, or those charged with crimes but unable to afford counsel.

In an effort to improve this system, the Travis County Commissioners Court approved a state grant proposal in May that, if awarded, will cover half the startup costs of a general public defender’s office. Austin is the largest U.S. city without one.

Although the cap includes a carve-out for some indigent defense spending, it does not include public defender’s offices.

Some commissioners have raised concerns about how the county will afford the new office in light of the cap, especially once the grant runs out and the county is responsible for funding it fully.

“We’d be challenged to implement [the office] over time without having some serious implications to other county programs,” Budget Director Travis Gatlin said.

Members of the work group tasked with developing the proposal said commissioners knew a 3.5% cap was likely when they voted to approve it.

“I don’t think the proposal that we’ve put forward was a kind of pie in the sky,” said Amanda Woog, chairperson of the work group and executive director of the Texas Fair Defense Project.

The cost of the proposed public defender’s office to the county is $26.9 million over four years. Comparatively, the county spent $233.2 million on its sheriff’s and prosecutor offices in FY 2018-19.

The city and county are developing their budget proposals for FY 2019-20, the last year the rollback rate will be 8%. Short-term, the cap could cause higher taxes.

“The perverse effect of what the Legislature has done is it has sped up some of the investments we intended to make in a phased approach so that we can shove them in ... this year’s budget, knowing that we will be seriously curtailed in at least the next two budget cycles,” County Judge Sarah Eckhardt said at a Commissioners Court meeting June 18.

The Legislature reconvenes in 2021, but Eckstein said it is unlikely the cap will be reconsidered.

“There’s still going to be a little ideological, hardcore [group] out there that’s going to say, ‘Three-and-a-half [percent] wasn’t low enough. We should have gone for two-and-a-half.’”