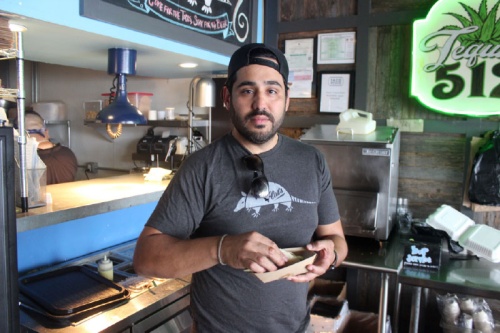 Owner Simon Madera tries a taco from the kitchen at the Taco Flats location on Burnet Road.

But Taco Flats, Madera’s bar and restaurant, is now celebrating its five-year anniversary offering handmade tortillas and spit-roasted meats on Burnet Road, and within the last two years, Madera has opened two new spots. Mezcal bar La Holly in East Austin opened in 2018, and Madera converted the former Zocalo Cafe in Clarksville to a Taco Flats in April of this year.

After receiving his MBA from St. Edward’s University and working in banking, he took out a loan to buy a liquor store at the Triangle. When he was running the liquor store, Madera realized the Burnet Road area was in need of a neighborhood bar.

“I was fixated. I thought it was underserved,” Madera said.

Originally Madera thought he would do wings and burgers at the bar. But in conversations with his family and friends, he said he came to the realization that tacos would be truer to himself. Madera is originally from Mexico and grew up in South Texas before moving to Austin in 2001 for school.

His mother ran a catering company and cafe in McAllen and Edinburg, and Madera spent time in Mexico City as he developed the concept for what became Taco Flats. When he opened the first spot, he thought he could offer the market something not many bars were doing.

“It’s marrying what Austin was already trying to do with some traditional flair,” Madera said.

During the expansion, Madera said he needed to ensure the Burnet Road Taco Flats did not suffer.