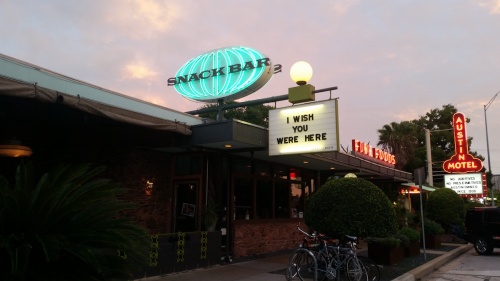 The Snack Bar on South Congress Ave. will close Oct. 30 after seven years.

In a letter to patrons on their website, the owners of Snack Bar on South Congress Avenue announced Tuesday the restaurant would close at the end of October after seven years in business.

"No matter how difficult and emotionally charged this decision has been, the timing of our closure was ultimately our choice," wrote owners Bethany Andree and Karl Gilkey in the letter.

They said they are closing Snack Bar—which serves organic, sustainably-sourced dishes and is located at 1224 S. Congress Ave., Austin—because of the sale of Austin Motel and its surrounding properties to Greenfield Partners LLC in May.

The Austin Motel and surrounding properties, including Snack Bar, is managed by Bunkhouse Group, an Austin-based hospitality management company.

Bunkhouse Group said on its website not to worry—the iconic Austin Motel sign is staying, although some changes are coming soon. Molly Olive, a public relations spokesperson, could not confirm what changes are coming.

"Snack Bar has been a second home for so many locals and home base for countless tourists," Andree and Gilkey wrote, adding their restaurant is part of the "dwindling number of DIY mom and pop restaurants that keep Austin weird."

"One thing is for certain, no small independent business can survive without the support of their community," Andree and Gilkey wrote.

The owners published a link to their letter on Facebook and received several comments from readers: