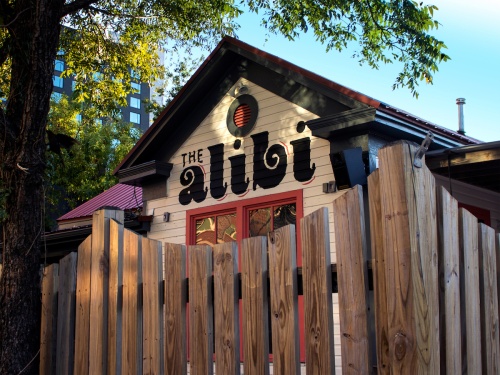 Rainey Street has gone from a secluded, single-family neighborhood to a densely populated city corner where high-rises and bungalow bars, like the one pictured, dominate the landscape.

The Rainey Street District of today—one of the city’s most popular entertainment districts—contrasts sharply to the area of 20 years ago—a modest single-family neighborhood with a clear Mexican-American identity.

The relatively abrupt shift, which began following a 2005 zoning change by City Council, from a secluded, quiet neighborhood to one of the most densely populated corners of the city, has come with consequences. Pedestrian and vehicular traffic has skyrocketed absent enhanced infrastructure, and the Mexican-American identity of the neighborhood has essentially disappeared.

Council Member Kathie Tovo, whose district encompasses Rainey Street, said these changes, though at times unwieldy, were meant to be eased through the 2013 creation of the Rainey Street District Fund, which aimed to ensure the area’s rapid development would pay for infrastructure improvements and cultural preservation. However, City Council and city staff have since failed to get on the same page, and the fund’s substance has faded.

As the area’s evolution continues to exacerbate infrastructure troubles and push its Mexican-American identity further into the past, and with a potential $1.3 billion expansion of the Austin Convention Center across the street in the works, Tovo, the only contemporary council member who was on the dais during the fund’s genesis, has been adamant about its revival. However, not all of her colleagues agree with its merits.

A split City Council postponed a vote on the item at its Aug. 22 meeting. Supporters said the fund would pay for necessary sidewalks and mobility improvements in the area and finance cultural preservation initiatives. They called on city staff to fulfill council’s 2013 direction to finance the fund. Those in opposition said it would reprioritize funds by circumventing the citywide rank and order of areas in need of infrastructure improvements, flying in the face of City Council’s equity policies.

In 2013, eight years after City Council upzoned the Rainey Street District from residential single-family to central business district—the densest zoning category offered by the city’s land-development code—officials wanted a way to ensure the growth in the area was also providing further community benefit.

The district was already listed in the National Register of Historic Places. As single-family lots were sold, the city wanted to ensure the structures were rehabilitated or preserved, relocated or maintained as affordable housing. They wanted also to memorialize the Mexican-American heritage of the district as rapid change moved through the neighborhood. To make growth pay for this, the fund would collect right of way fees, alleyway vacation sales and money from license agreements within the district.

The ordinance creating the Rainey Street District Fund was brought to City Council on Oct. 24, 2013. According to transcripts from the meeting, City Council members and city staff initially expressed confusion over the ordinance’s wording and whether it created a one-time fund or a perpetual account for the district.

However, Council Member Mike Martinez and finance department staffer Greg Canally cleared up that uncertainty. Martinez said it would “clearly” be a perpetual fund.

“We wouldn’t create a preservation district for one year,” Martinez said during the meeting.

Canally later confirmed a question from Council Member Laura Morrison, who asked if the city would see money funneled into the fund every year.

“Yes, council member … as the funds are collected, they will be brought back to council as part of our annual budget process, and it will be part of adopting, in this case, the capital budget for this fund,” Canally said.

Although the fund could collect more in the first year, the ordinance capped first-year spending at $600,0000, which Canally called a “conservative” fundraising projection given all the projects coming down the pipeline for the area. Although there was some debate, the fund would also be allowed to collect the fees from the Fairmont Hotel development when they were ready to come in. The city estimated around $1.5 million would come from the Fairmont Hotel alone.

Council Member Sheryl Cole made a final amendment to the ordinance to include infrastructure, such as sidewalk construction, to the list of programs for which the fund could pay.

Fast-forward six years to 2019, and the fund never received any money beyond the initial $600,000, and it has only spent roughly $500,000 on home relocation. Part of this is due to the way the final ordinance was written and signed.

In a June 14 memo to City Council, Elaine Hart, the city’s deputy city manager, said had the fund been active for the six years as City Council intended, an additional $1.8 million would have been distributed into the fund. Tovo said she was uncertain about the numbers, especially if the Fairmont Hotel alone would have provided around $1.5 million, per staff projection.

City staff was unable to respond to Community Impact Newspaper’s inquiries about numbers by press time. However, staff recommended against reviving the Rainey Street District Fund and instead allocating the money to citywide priorities, rather than just in one area.

Sandra O’Neil, a resident in the area, and Paul Saldaña, a local business leader, pushed City Council on Aug. 22 to recreate the fund.

O’Neil warned of continually failing streets, sidewalks and intersections, while Saldaña joined her in lamenting the missed opportunities to memorialize the neighborhood’s Mexican-American heritage.

Council Member Leslie Pool said the city “owes a debt of service” to the people of the neighborhood. Tovo restated her commitment to the residents and history of the area.

“I am absolutely committed to make sure we identify resources for much-needed improvements and memorialization [of the neighborhood’s history],” Tovo said.

Mayor Pro Tem Delia Garza said she was less concerned about sidewalks than the fund’s aim of commemorating the neighborhood's Mexican-American past. She said the city has failed to provide a place that celebrates the city’s Mexican-American heritage.

Austin Mayor Steve Adler and Casar agreed that if the fund was more concretely aimed at cultural preservation, they could support it. However, City Council could not come to an agreement and postponed the item to Sept. 19.