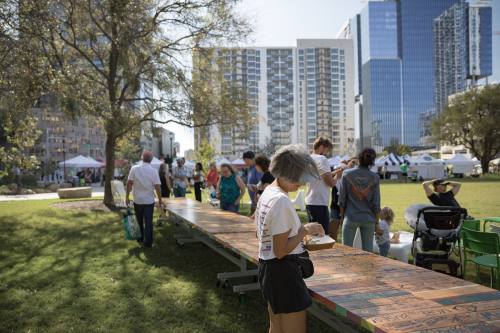 This fall, community members drew their visions for the future of Downtown Austin on wooden boards that were turned into a table.

This past fall, the Downtown Austin Alliance asked Austin residents to offer their opinions, hopes and concerns regarding downtown. On Wednesday, the DAA presented its “Downtown Austin Vision,” which it created based on the feedback it received from community members throughout last year.

The DAA, a nonprofit organization that works to enhance Austin's downtown vitality, set up an online survey; hosted focus groups with communities of different races, socioeconomic status and ages; and spoke to civic and community leaders to gather the feedback. It hosted "community's table events" in which individuals drew their visions of downtown on a wooden block, and the blocks were put together to form a table.

More than 3,000 responses were received from residents in 75 different ZIP codes, including 2,200 responses to the online surveys. It would be fair to assume so many opinions and voices might lead to a tangled web of potential solutions to downtown’s issues. However, according to DAA vice president of planning Melissa Barry, that was far from the case.

“The thing we really learned from that is a lot of the feedback on what people want to see in the future of downtown was very similar,” Barry said. “We were able to distill some very common themes we heard throughout the process into aspects moving forward into the downtown vision.”

According to the “Downtown Austin Vision" executive summary of findings, 23 percent of respondents said they “love” downtown Austin and 48 percent say they “like it a lot.” However, those respondents raised concerns ranging from downtown’s affordability, walkability, traffic congestion and the maintenance of its unique character.

"Participants were passionate about sharing their ideas, recognizing that downtown Austin is at a crossroads," the vision's executive summary reads.

To address those concerns, the vision includes four priority areas – high level goals that are broad enough to remain guideposts even as downtown grows and changes. Those priorities include providing “a variety of options for people to get around downtown” and delivering “a consistently clean and safe downtown experience.”

Mike Kennedy, chair of the DAA board and the vision steering committee, said the pace of downtown's population grown in the last ten years created a need for a high-level vision alongside more actionable, flexible goals.

“(The growth) creates a different element to the city," Kennedy said. "It goes from an 8-to-12 hour city to an 18-hour city moving toward a 24-hour city.”

Some respondents had specific issues they wanted to see addressed as well as big-picture ideas. The vision includes seven "transformative initiatives"-or items that will help achieve the high-level priorities. Those initiatives include lowering and capping I-35’s lanes through downtown; developing a cultural trust; and implementing a “comprehensive vision and strategic plan” to address homelessness.

The vision aims to implement its goals by 2039, Austin’s 200th anniversary. DAA President and CEO Dewitt Peart said the 20-year timeline will push the DAA to work on its goals right away.

“Twenty years seems to be far enough away to get things done, but close enough that you can’t ignore it,” Peart said. “It’s always good to have a deadline, and there’s nothing like having a birthday party that sort of creates that deadline.”