Austin grapples with regulations for scooters, micro-mobility after one year in the city 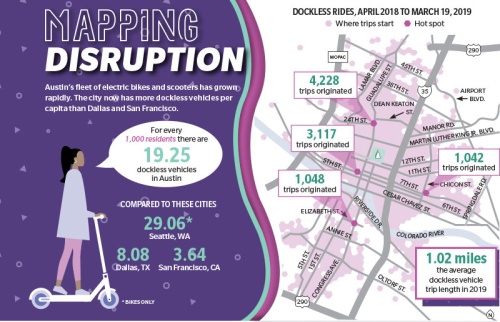 Updated March 26 at 4:30 p.m. to clarify the city of Austin's effort to regulate ride-hailing companies

This April will mark one year since dockless vehicles arrived in Austin, but the city continues to workshop their regulations, balancing a need for safety with room for innovation.

“Half of people I run into have had near-death experiences with a scooter, and the other half of the city can’t imagine life without a scooter,” Austin Mayor Steve Adler said at a Feb. 28 mobility committee meeting.

While some cities—such as Seattle and Dripping Springs—have banned dockless scooters, Austin has emerged as a leader that other cities look to as they develop their own regulations, said Greg Griffin, an associate research scientist at the Texas A&M Transportation Institute—the largest transportation research agency in the country—who has researched bike-share programs.

But Austin continues to refine its rules. The transportation department paused issuing licenses to companies in January as it revises demand for these vehicles. The parks and recreation department is overseeing a pilot program to determine how to integrate these vehicles on trails and parkland. The public health department has partnered with the Centers for Disease Control and Prevention to study scooter crashes and their causes. And City Council will vote on a number of changes to its ordinance regulating rider behavior at its March 28 meeting.

Despite concerns about safety and enforcement, all signs point to scooters and similar disruptive technologies—innovations that spawn new industries  and shake up existing industries— remaining a part of the city’s transportation network for years to come.

“[T]his is perhaps the early side of a rapid set of changes in mobility,” Griffin said.

Today, there are 10 dockless mobility companies licensed to operate in Austin, with a combined total of 17,650 permitted vehicles among them, per the Austin Transportation Department. The majority of the vehicles—15,300, or nearly 87 percent—are electric scooters.

“We see private companies looking at transportation as a kind of new consumer market,” said Ginger Goodin, an Austin-based senior research engineer at the Texas A&M Transportation Institute who has studied disruptive  transportation technologies. “We’re going to continue to see innovators and entrepreneurs developing solutions to address the really big challenges that we have, in congestion and safety and equity,” which, she added, public agencies do not have the funding to address.

It appears Austinites are seeking such solutions. Between March 1 and March 18, 496,608 dockless vehicle rides occurred in the city, up from 371,307 in February and 51,166 in April 2018, when the first scooter operators launched, per ATD.

Consumer demand is critical, as the city learned when it tried to require ride-hailing companies to perform fingerprint background checks on drivers, which some companies, such as Uber and Lyft, argued were overly burdensome and led them to halt operations in Austin. Ultimately, state lawmakers passed regulation in 2017 that trumped local ordinances.

“[Ride-hailing companies] had already built up a consumer market where people were getting it; they liked the services; and they wanted to continue to use them,” Goodin said. “So those policymakers faced a backlash from their constituencies [when they tried to ban them].”

This technology may also appeal to tourists and Austinites who are interested in sustainability.

South Austin resident Clint Buckley said he uses scooters to get lunch while at work and when traveling locally along Ben White and Lamar boulevards but worries about areas that lack designated spaces for dockless vehicles.

“As long as the infrastructure is there, like having a bike lane and having some distance from the cars, it is so much more comforting,” Buckley said.

As of press time, one scooter-related fatality has been reported. It occurred around 1 a.m. on Feb. 2, when a 21-year-old scooter user riding the wrong way on the I-35 frontage road was hit by a car.

Austin Public Health, along with the CDC, continues to study the causes of these incidents as well as the safety of these devices relative to other forms of transportation. Their findings are expected to be published by early April.

Another concern is whether riders are following rules established by the city’s transportation department last fall.

“There really is no enforcement happening,” said Heidi Anderson, executive director of the Trail Foundation, a nonprofit that maintains the Butler Hike-and-Bike Trail along Lady Bird Lake.

Dockless vehicles are not allowed on the trail, per city ordinance, but Anderson said people frequently ride and leave scooters along the trail and, sometimes, in the lake.

“[W]e’ve lost donations due to the scooters,” Anderson said. “[Previous donors said] they don’t want to support us because they think that we have more authority than we do.”

On March 28, City Council will vote on a series of changes to its ordinance governing rider behavior.

The changes include redefining dockless mobility as “micro-mobility,” a broader term that would allow regulations to apply to future transportation modes; requiring micro-mobility users to obey the same rules of the road as drivers; and providing local law enforcement authority to issue citations to those violating the ordinance, per a draft presented by ATD at a March 18 meeting of the Urban Transportation Commission.

Later this spring, ATD will present additional proposals to council, including a potential cap on the number of micro-mobility operators, similar to the city’s approach to pedicabs, and increased operation fees that would allow the city to recoup the costs of processing applications, inspecting fleets, responding to citizen service requests and investing in infrastructure.

“What we see in public policy innovation is it tends to be an incremental process,” Goodin said. “It’s hard for public agencies ... to anticipate what could be coming and to set up a regulatory framework in advance.”

Dockless mobility “is the biggest change to the transportation landscape in over 70 years,” Jason JonMichael, assistant director of smart mobility for ATD, told Community Impact Newspaper in January. But it is not likely the last.

Representatives at Lime, Bird and Ojo Electric said they are working to improve their geofencing capabilities, which would allow them to restrict vehicles’ use to areas where they are allowed.

“We’re striving for that technology,” said Matt Tolan, vice president of sales and partnerships at Ojo, which recently launched 100 seated electric commuter scooters in Austin. “We’re not there yet.”