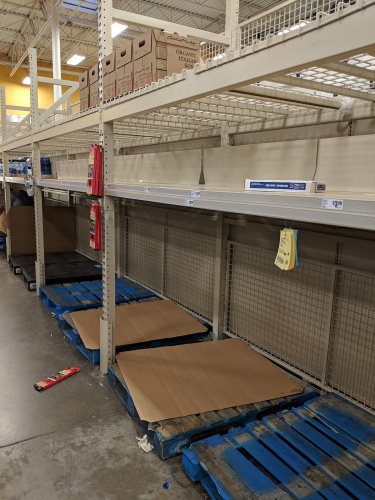 Austin-area H-E-Bs were cleaned out of their bottled water supply early Monday morning.

Austin-Bergstrom International Airport has turned off its water fountains, and some concessions are only serving prepackaged food and beverages while the boil advisory is still in effect, according to the airport's Twitter account.

The sterilization process is being monitored according to strict guidelines based on industry standards, per the statement, and elective surgeries continue on a case-by-case basis at the discretion of physicians.

According to an Austin Humane Society press release, the nonprofit will need at least 50 gallons of water each day to keep all of the animals in its care hydrated and healthy.

The advisory is a result of historic flooding last week, which overwhelmed Austin Water's filtering system.

While safe for showers, laundry and other household uses, any water for consumption should be boiled for three minutes before being used.

Many H-E-B stores have been emptied of their bottled water supplies following the advisory announcement.

"Once we were notified of the boil notice, we began sending additional trailers full of water and will continue to as needed," a company spokesperson said via email.

The San Antonio Water System also announced Monday morning that it had dispatched a 5,000-gallon water tanker to Austin to help residents deal with the advisory.

At AISD, drinking fountains are being covered or closed, cafeteria managers are following boiling instructions and menus have been adjusted to provide fruit and vegetable alternatives to the salad bar, which will not be open today.

Due to the advisory, some local businesses have temporarily closed, including South Austin's Bouldin Creek Cafe, both locations of Magnolia Cafe, and Jack Allen's Kitchen in North Austin, citing a lack of clean water for cooking and serving.

"We are asking for your support today by bringing any bottled water (or water from outside Austin city limits) to the shelter. We're hearing reports that H-E-Bs have already started seeing a serious depletion in their stocks of bottled water. We have placed an order for bottled water from Amazon, but the reality is that it likely won't be enough to meet our needs and it won't be delivered immediately," the nonprofit wrote.