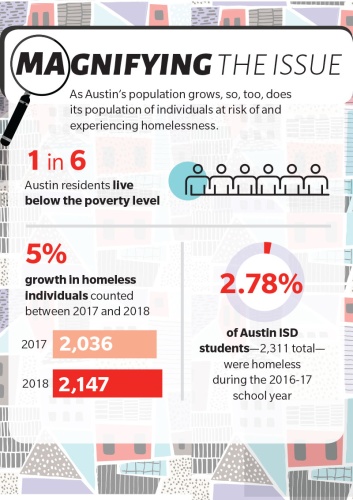 In August,  Austin City Council will vote on whether to send a $925 million bond proposal to voters which would allocate $250 million to affordable housing.

This decision comes on the heels of other efforts by City Council to address Austin’s rising cost of living–and the attendant issues it creates.

In April, the Ending Community Homelessness Coalition, or ECHO, a local nonprofit, announced the results of its 2018 Point-in-Time Count. The homeless population in the city of Austin and Travis County increased 5 percent since the previous year’s effort.

Funding has not yet been secured, but the plan seeks private investment tied to the achievement of measurable outcomes, such as the number of successful housing placements.

“By doing nothing, we’re still incurring huge costs, so it would be smarter for Austin to spend the money to house people,” ECHO Executive Director Ann Howard said.

City Council is also scheduled to review Austin’s “No Sit/No Lie” ordinance—which prohibits sitting or lying down on city streets or sidewalks for more than 30 minutes at a time and leads to thousands of arrest warrants each year—and is working to redefine the scope of the Austin Resource Center for the Homeless and its services.

But area stakeholders agree it will take more than local government to end homelessness.

“It’s incumbent upon the private sector and nonprofit sector to partner with the public sector so that everyone’s at the table,” said Bill Brice, vice president of Operations at the Downtown Austin Alliance. “We can’t sit back and say, ‘City of Austin, fix this.’”

One in six Austin residents lives in poverty, according to the U.S. Census Bureau. This rate is lower than San Antonio’s—nearly one in five—but higher than comparably-sized San Francisco’s —close to one in eight.

More than a third of Travis County households are cost-burdened, in that they spend more than 30 percent—the standard recommended by the U.S. Department of Housing and Urban Development—of their total income on housing.

And there are more than five evictions per day in Austin, a rate that is estimated to be conservative by the Eviction Lab at Princeton University.

Fred Fuchs, an attorney at the Texas RioGrande Legal Association and the director of The University of Texas School of Law Housing Clinic, said many Austinites struggle with burdensome late fees, which can sometimes surpass rent, and laws that allow landlords to consider a prospective tenant’s eviction history for up to 10 years.

For those already living near the margin, car trouble or an unexpected illness can reasonably lead to an eviction.

“[I]t makes for an impossible situation for many clients,” Fuchs said.

“It isn’t necessarily the mental health diagnosis or the addiction that sends you to the streets,” Quinn said. “It is this combination of you don’t have access to [health care or treatment] services, so you lose your job, and your job wasn’t paying very well already because you’re living in poverty, so your distance to the street is just shorter.”


The gold standard in homelessness policy is a housing-first approach.

“You meet someone where they are,” said Greg McCormack, executive director of Front Steps, the nonprofit contracted by the city to manage the ARCH. “If they’re using substances or mentally ill, then that does not preclude them from getting into services.”

In Austin, individuals experiencing homelessness may access housing services through a variety of ways.

Those staying at the ARCH or Salvation Army shelters are connected to case-management services offered by area nonprofits.

Since 2016, the Austin Police Department has managed a Homeless Outreach Street Team of two officers, two behavioral health specialists, a paramedic and a social worker.

As do area nonprofits, HOST encourages individuals to complete a coordinated assessment to determine the most effective intervention.

For those who have been homeless less than a year, rapid rehousing is the best practice.

Furnished with a temporary housing subsidy, they are generally able to restabilize in six  to 18 months.

For the chronically homeless—those with a disability who have been living on the streets or in shelters for at least one year—permanent supportive housing is a nationally proven solution.

According to Caritas of Austin’s 2017 annual report, 97 percent of individuals enrolled in its permanent supportive housing program remained in stable housing one year after placement.

“What we want to do is right-size the service,” Quinn said. “We don’t want to use the same intervention for people experiencing different kinds of homelessness because they have very different needs.”

In 2010 the federal government launched the Mayor’s Challenge to End Veteran Homelessness, which former Austin Mayor Lee Leffingwell accepted in 2014 and which was continued by his successor, Steve Adler.

The city coordinated with area nonprofits, the local housing authority and real estate stakeholders to identify homeless veterans, secure housing vouchers from the U.S. Department of Veteran Affairs and liaise with landlords, who are not required to accept vouchers and may refuse to do so.

Another model can be found just beyond Austin’s eastern city limit.

Alan Graham is the CEO of Mobile Loaves & Fishes, which has provided meals to Austin’s homeless since 1998.

In doing this work, Graham identified a “profound, catastrophic loss of family” as the root cause of homelessness.

In 2005 Graham began to fantasize about building an RV park as a community-first solution. “I recognized the inherent sense of community inside these places,” he said. “We bought the first RV, then the second, then the third.”

The village also has its own micro-economy, powered by residents who create art, service cars, cut hair and perform carpentry. In 2017 the program produced $400,000 in resident income.

“The initial, first-line premise is that every human being that moves into this community will need to be subsidized for the rest of their lives,” Graham said. “It doesn’t mean that they’re not going to be productive.”

Despite these successes, Austin—like every other city in the country—has yet to discover a solution to homelessness.

“The reason that we all continue to struggle is because homeless services systems do not have enough money,” Quinn said.

“The nonprofits can’t do it alone. It’s mathematically impossible. The for-profits are going to have to step in and carry their load on this,” he said.

While developers are not required to invest in affordable housing, some do.

To those who feel homelessness is an insurmountable problem, Howard cautions hope: “Let’s fund the plan and let’s house everyone who wants housing, who will accept it, who is begging for it, who is crying for it. And when we’re down to just the ones who don’t want it, let’s write a new plan and figure out how to get them into housing [too].”