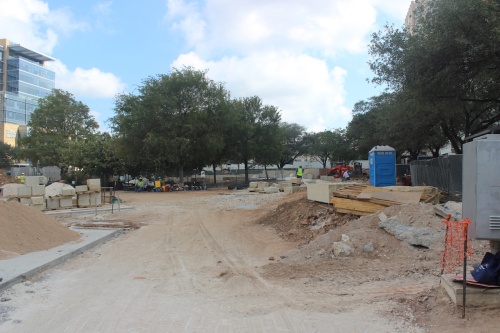 Republic Park Square in downtown Austin will be complete this fall.

Construction on renovations for what many consider Austin's oldest park is underway, with a completion date set for August.

Located on Guadalupe and Fourth streets, Republic Square Park will include a food kiosk and dining area, a central lawn, a limestone wall made for sitting and a concrete path around the main lawn.

The $5.8 million project is on budget and on schedule, according to Austin Parks Foundation Development Director Shelley Hardeman.

"Many will tell you this is Austin's most historic green space," she said.

Republic Square Park is one of Edwin Waller's four planned downtown community spaces mapped out in 1839 within the 14-block Waller Grid. The other parks included Brush, Bell (now Wooldridge) and Hemphill, which is no longer a public square.

The area was also home to Our Lady of Guadalupe Catholic Church, the first Spanish-speaking church in Austin, according to Hardeman.

It's also the site of Auction Oaks, where people gathered in 1839 to auction lots laid out in the Waller Grid.

Over the years, the park lay in disarray and was even a parking lot for 15 years in the mid-1900s, Hardeman said. The city of Austin technically leases the land from the state.

"This park has had many different lives and taken many different forms in its lifetime," she said. "For the last 20 years, this land has needed to be cared for in a much better way than our city's parks and recreation department could afford," she said.

Crews are currently working to plant trees, finish the concrete pathway and limestone wall as well as get the dirt ready for grass.

As construction continues, the area around the park is booming with activity. Across Guadalupe Street to the east, the noise from the under-construction Hotel Zaza competes with the sounds from Republic Square Park.

The corner of Guadalupe and Fourth is also the site of the Capital Metro's busiest transit stop, according to Hardeman.

Across Fourth Street to the south, a parking lot is set to become a mixed-use development after the property—owned by Travis County—sold to Lincoln Property Co.

The Downtown Austin Alliance is seeking approval from City Council to allow the park to be closed for up to 20 days every year for private events. The 20 requested full-closure days could include set-up and tear-down days in association with an event. The rental fees associated with the private events would be puts toward park operations.

The park will also continue to serve the SFC Farmers’ Market on Saturdays.