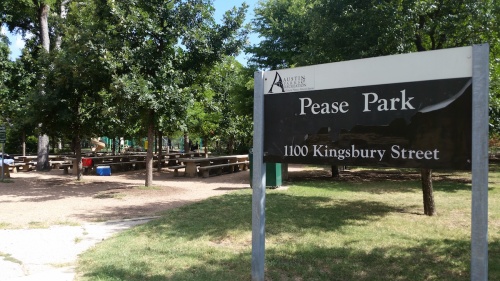 Now in her fourth week with the Pease Park Conservancy, new CEO Kristen Brown said she is still learning the ropes of the park nonprofit world.

Her previous experience includes consulting for dance, arts, education and school-related nonprofits, but the world of parks is brand new to her.

What she lacks in parks knowledge, she makes up in business and fundraising expertise. With a graduate degree in public affairs with a concentration in nonprofit and philanthropic studies from The University of Texas, Brown has served as a diplomacy officer at the U.S. Embassy San Salvador and has run the nonprofit Austin Smiles, which provides cleft lip and palate surgeries to children in mission countries.

Today, the Austin native is in charge of fundraising efforts to improve the city's oldest park as the conservancy's first CEO.

"I've really been brought in to really professionalize the organization," she said in an interview Thursday. "I've been brought on to take [the conservancy to] the next level."

In 2008, fifth-generation Austinite Richard Craig formed Trees for Pease, an Adopt-a-Park group, Brown said. Craig and other volunteers got together to enhance and improve the park, and by 2013 the organization received its nonprofit status and became Pease Park Conservancy.

For the last three years, Brown said the conservancy has been run nearly single-handedly by Executive Director Andy Gill, who Brown will be replacing as Gill moves back home to Wisconsin in the spring.

"We're having this long overlap because there is so much for me to learn," Brown said.

Located at Kingsbury Street and Parkway off 15th Street near downtown Austin, the 84-acre, city-owned park includes a splash pad, playground equipment, concrete picnic tables and a trail that stretches from 15th to 31st Street along Shoal Creek.

It's the home of the decades-old Austin tradition Eeyore's Birthday Party and occasionally to Austin Parks Foundation's Movies in the Park series. It's also home to part of Shoal Creek and the Shoal Creek Trail, which is currently undergoing its own master planning process.

Since the plan's adoption, the conservancy has started checking off projects as funding becomes available—a few trees have been planted, some sidewalks have been improved and traffic-calming measures have been put in place around neighborhood streets.

Brown estimates implementation of the master plan's first phase—including work on the lower 6 acres of the park near Kingsbury Street, commonly known as Kingsbury Commons—will cost upwards of $5 million.

Plans include "adaptively repurposing" the 1920s-era Tudor Cottage to make it useful for parties and meetings; restoring the historical stone walls at the entrance of the park—what Brown calls the "Kingsbury Gateway"—and building The Kingsbury Pavilion, a multiuse facility that houses modern restrooms, storage, and additional picnicking space just north of Tudor Cottage.


'The essence of Pease Park'

Brown said there is no timeline for implementing the master plan. The conservancy is in talks to develop a capital campaign aimed at raising funds for the implementation of phase one, she said.

The authors of the park's master plan wrote in September 2014 that Austinites "have yet to know the full value of the hidden gem that lay before them."

"Pease Park, by virtue of its character and strategic location, is an exceptional and undervalued, albeit much loved, community treasure," the authors wrote, adding the park had not reached its full potential. "This is a good time to plan for its future, and to aspire to a build on the Park and greenbelt’s noble past of groundbreaking environmental history."

As the organization prepares to launch the capital campaign, Brown said she wants to make sure whatever changes are made to the park don't change the character of the area.

"The essence of Pease Park is not going to be changed," she said. "Pease Park is still Austin's central city park."