This Austin neighborhood is one of the greenest in the world 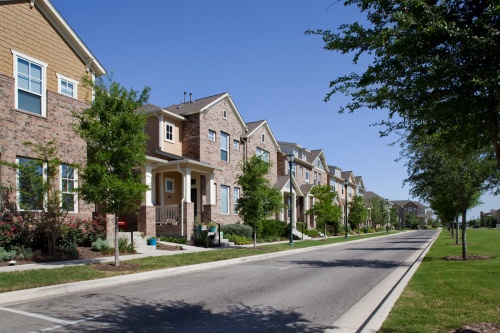 The Mueller neighborhood was named the largest in the world to become Stage 3 LEED-certified.

Mueller, the 700-acre development located at the site of the former Austin airport, has been named the largest neighborhood in the world to achieve LEED gold certification, according to a Wednesday announcement.

LEED—or Leadership in Energy and Environmental Design—certified buildings are resource efficient, use less water and energy and reduce greenhouse gas emissions, according to the U.S. Green Building Council, the organization that issues the certifications.

There are four LEED certifications: certified, silver, gold and platinum.

Mueller is also the first neighborhood to receive a gold certification under USGBC's pilot neighborhood program, which focuses on certifying entire neighborhoods that are sustainable and well-connected.

"By progressing to and achieving this certification, the Mueller neighborhood is helping to lead the way for the development of smarter and healthier communities while prioritizing environmental and human health in our built environment," said Mahesh Ramanujam, president and CEO of USGBC and Green Business Certification Inc.

"Mueller has achieved many sustainable milestones along the way in terms of its land use, building design, construction efforts and property owner commitments," she said. "All of these endeavors have resulted in a comprehensive approach to a community that promotes healthy design and sustainability, which underscore Mueller’s impressive performance and certification."

Among the neighborhood's buildings, the Dell Children's Medical Center is the first LEED platinum certified hospital in the world, and the H-E-B in Mueller is one of the first grocery stores in the U.S. to earn LEED gold certification. The Mueller neighborhood has a 15-piece art sculpture that traps solar energy during the day.[/caption]

The neighborhood also has residential rooftop solar panels, electric vehicles, a 15-piece art sculpture that collects solar energy and an energy center that converts waste heat into free energy in the form of chilled water for neighborhood businesses.

"From the beginning, the city of Austin and Mueller's neighbors were instrumental in the creation
of the Mueller master plan, making sustainability a primary goal of the airport’s redevelopment, " he said.

Mueller is a joint project between the city of Austin's economic development department and Catellus Development. The buildout of the neighborhood began more than 15 years ago following nearly 20 years of citizen input.

Although an expected buildout date is not known, upon completion the neighborhood will have at least 5,900 single-family and multifamily homes, a mixed-use town center district, 4.4 million square feet of commercial space and 140 acres of parks and open space.