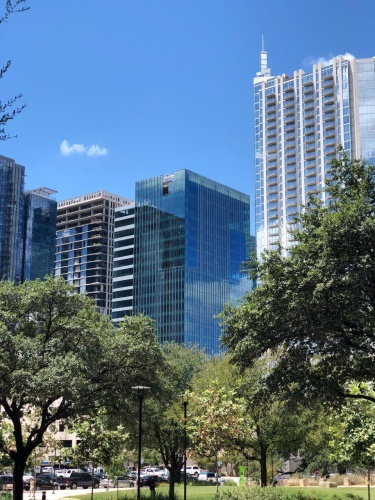 Third and Shoal, a new 29-story, Class A office building in downtown Austin, will open in spring 2019.

Developers provided updates on three major downtown projects, including a newly announced 32-story hotel and residential tower planned for the corner of Fifth and Brazos streets, at a Real Estate Council of Austin event on Thursday.

Operated by the Austin Geriatric Center, the RBK Senior Center currently includes a 16-story tower. The renovation involves the addition of a five-story wrap-around building, which will include 279 new units of affordable senior housing—bringing the total up to 504—when it is finished in June 2022.

According to Mitchell, the project has faced some challenges—long waits for permits, zoning restrictions and a large number of heritage trees on site that need to be accommodated for in the design.

When completed, however, the senior center will provide housing options for Austin residents making up to 60 percent of the median family income. It will also include a ground-floor retail plaza that will serve the community at large.

The tower will include two hotels—one from Thompson Hotels, which has luxury, boutique locations across North America, and the other from "micro" hotel company Tommie, which aims for a younger market—as well as long-term residences, two “flex floors” that can be adapted for either short-term or long-term use depending on the market demand and ground-floor retail, according to Leisy’s presentation.

Pending permit approval, Leisy said construction on the project will begin at the end of this year and be completed in early 2021.

Tyler Buckler, a principal at Austin-based Cielo Property Group, was the last to present, speaking about a 29-story, Class A office building with ground-floor retail slated to open at Third Street and Shoal Creek Boulevard, in spring 2019.

The site was previously home to Austin Music Hall.

The building is 99 percent leased, Buckler said, and tenants include Facebook and Bank of America.

Cielo’s goal in developing the property was to make an office tower that was “cool,” Buckler said, and that would appeal to both a 22-year-old tech professional as well as his suit and tie-wearing father.

The firm also chose to view the neighborhood around the building, which includes the Shoal Creek waterfront and Lady Bird Lake Trail, as the main amenity, rather than going “overboard” on in-house amenities.

“Everything feels really good today,” he said of the local economy. But timing is crucial.

“Eventually it is going to stop.”
SHARE THIS STORY