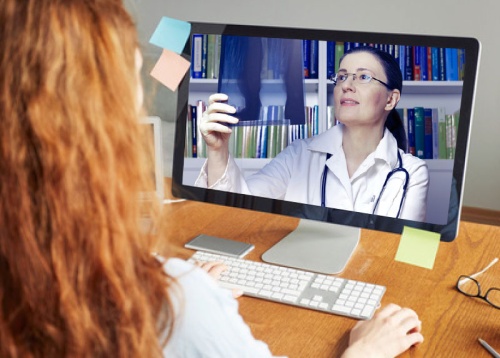 Telemedicine is the provision of healthcare services to a patient by a doctor in a remote location using technology.

Or as Kristi Henderson, vice president of Patient Access, Healthcare Transformation and Virtual Care at Ascension Texas and a clinical professor at Dell Medical School at The University of Texas at Austin, sees it, telemedicine is like the grocery store express lane.

“If you have a minor illness or injury and just need to have a follow-up appointment, why are you going to the line that has everybody with two buggies full of groceries and which costs more money? Why can’t you do it in an express lane?”

Although telemedicine has been practiced in Texas for years, in May 2017 the Legislature passed a bill easing restrictions on telemedicine and opening the door to increased use across the state. The bill took effect in November.

As a result of the legislation, local health care providers, including Ascension Texas, Austin Regional Clinic and CommUnity Care, have expanded their telehealth services and invested in developing new ones.

It also has implications for the Austin tech industry, where startups are developing new telemedicine products, and local government agencies, such as Austin ISD, which implemented virtual care in three of its schools last August.

One week later, she connected with her surgeon, Christopher Bailey, on ARC’s telemedicine portal for her follow-up appointment, showing him her incision via a live video feed.

“The convenience factor for someone who can’t travel well [and] who has small kids to care for … was amazing,” Prince said.

The convenience of telemedicine is crucial, according to Henderson.

“We know that the health care system costs too much, and we also know that people find it inconvenient,” she said, citing the cost of missing work, arranging for child care and contending with Austin traffic as disincentives to making and keeping appointments.

“Those kinds of barriers and friction [mean] people put it off. Then it becomes not about health and wellness. It becomes about sick care.”

By making preventive care more convenient for patients, telemedicine helps offset the costs and risks of more critical care down the line.

There are other cost savings, too.

Matt Balthazar is vice president of Health Center Advancement at CommUnity Care, which provides health care to un- and underinsured patients at its 19 locations across Travis County.

Four years ago, CommUnity Care began a telepsychiatry pilot program funded by a Medicaid waiver it received from the federal government.

One way telemedicine helps CommUnity Care stretch its resources is by making the best use of its psychiatrists’ time. When a patient misses an appointment, the psychiatrist can video conference with another patient at a different location who otherwise would not receive care, Balthazar said.

“That’s where [telepsychiatry has] helped us be more efficient and increase access, while at the same time it reduces the cost of the individual encounter because we’re able to provide more services to patients rather than have one go unused.”

Austin-based telepsychiatry startup Cloud 9 has also had success with its Cloud 911 product, which was recently piloted by the Harris County Sheriff’s Office in Houston.

While responding to mental health calls, officers were able to connect with psychiatrists on-demand using tablets. The psychiatrist could then evaluate the person in need and advise the officer on the best course of action.

This product, Cloud 9 Clinical Director and co-founder Elizabeth Truong said, saved both the county and its taxpayers “a lot of money by diverting people away from ERs,” jails and prisons, where mental health care is publicly funded and much more expensive.

Medicine is a conservative, risk-averse and highly regulated industry. The tech world is perhaps its opposite.

Senate Bill 1107, which legislates the practice of telemedicine in Texas, had to uphold the Texas Medical Board’s standards while also allowing for advances in technology and for businesses to market telemedicine products successfully.

“[The Legislature] did a really good job of making the telehealth laws broad enough so that we allow for innovation, but also [it] allows for clinicians to practice good medicine, and that’s according to the standard of care,” Truong said.

The bill was achieved only after two years of negotiation, but Nora Belcher, executive director of the Texas e-Health Alliance, traces its roots back to a legal dispute that began years earlier.

The alliance was instrumental in convening the stakeholders who ultimately crafted SB 1107.

In 2011, Dallas-based telemedicine company Teladoc, which provides 24-7 access to a national network of physicians, took issue with new regulations set by TMB that required doctors to conduct in-person visits prior to telemedicine appointments.

Six years later, SB 1107 addressed this requirement, allowing doctors to consult with patients they had not yet evaluated in person so long as other standards were met. As a result, it also ended Teladoc’s lawsuit.

As with in-person visits, telemedicine encounters must comply with the Health Insurance Portability and Accountability Act of 1996—a federal law also known as HIPAA that protects patient privacy—and adhere to the standard of care.

Robert Bredt, medical director of TMB, defined the standard of care as  “what a reasonable or prudent physician would do in a same or similar circumstance.”

SB 1107 upholds this requirement, with the exception that insurers may deny coverage for telemedicine encounters that are not conducted via video conferencing, such as a telephone call or email.

“If you’re not worrying about breaches, you’re an idiot,” Belcher said. “But they are the price of doing business in the digital world.”

Consumer education is another challenge.

“The main issue [with telemedicine] is patients don’t really ask for it because they don’t know to ask for it,” Bailey said.

Despite the return on investment, the cost of the technology necessary for telemedicine appointments, including increased bandwidth and access to encrypted patient portals, is high.

“Everything we’ve built in a health system or clinic has to be replicated in a virtual space,” Henderson said.

At ARC, Bailey said the costs are worth it, for now.

“We’re looking toward the future,” he said. “We’re making an investment.”

Implementing a new bill has its challenges, but they are worth working through, according to Henderson.

“It’s our responsibility to make this law work for us,” she said.

Bailey anticipates telemedicine being a useful tool for facilitating group appointments, such as for colonoscopy patients. Instead of having to meet with many patients individually to explain the same procedure, a doctor could address a group of patients remotely. The patients, in turn, could save time by conferencing in from their home or office.

Henderson sees telemedicine as an important tool for chronic disease management, such as with diabetes.

“The future is the mom puts a bluetooth otoscope in the baby’s ear,” adhering to the standard of care for diagnosing ear infections. “She has a telemedicine encounter on her cell phone [with her child’s pediatrician], and then the drone will bring the antibiotics to her house,” she said.

“These technologies bring health care to where the person is instead of forcing the person to go to the health care. That’s a huge difference.”
SHARE THIS STORY