1. Only female mosquitoes drink blood.
2. Adult female mosquitoes typically live for one week to one month, depending on environmental factors.
3. As it feeds, a mosquito injects a small amount of saliva into the wound before drawing blood to prevent blood from clotting. The saliva causes humans’ itching and swelling from a mosquito bite.
4. Mosquitoes have existed for about 400 million years.
5. There are 176 species of mosquitoes in the United States and about 2,700 worldwide.
6. Mosquitoes fly at an estimated speed of 1.5 miles per hour.
7. Dark-colored clothing attracts some mosquitoes more than light clothing.
8. A full moon increased mosquito activity by 500 percent in one study.
9. Smelly feet attract certain species of mosquitoes. Choose a mosquito repellent that has been registered by the Environmental Protection Agency, including: 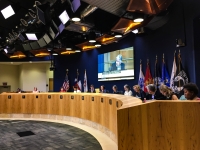 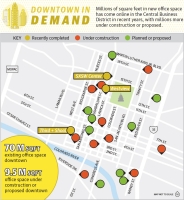 According to the Downtown Austin Alliance, 9.5 million square feet of office space is either proposed or under construction in the city's Central Business District.