Austin has spent hundreds of millions of dollars on COVID-19 support since February 2020, and officials are still spending millions more to address lingering public health needs and general community services.

A significant portion—more than $286 million—of the funds have come from various federal programs and relief packages, including the Coronavirus Aid, Relief and Economic Security Act and American Rescue Plan Act, or ARPA. Additionally, the Federal Emergency Management Agency, or FEMA, could still reimburse nearly $100 million.

However, the city could foot up to $150 million of its remaining pandemic-related bill. That money is directly tied to staff responding to the pandemic and will likely have to be supported by city dollars without federal reimbursement, according to officials.

While much of the city's work with COVID-19 has taken place behind the scenes in offices, labs and clinics, thousands of residents have taken advantage of the most public-facing work—testing and vaccination.

As of June 28, Austin Public Health has recorded more than 530,000 COVID-19 vaccine doses administered. And the health department as of early June, it had also conducted more than 215,000 tests, distributed more than 21,000 rapid testing kits to individuals and organizations, and helped more than 3,100 people isolate.

City Council voted to approve $41.91 million in pandemic-related contracts with various organizations June 9 and extend its contract for an isolation center for up to $744,000. And on June 16, officials approved $10 million in contracts for ongoing testing and vaccination.

Austin Public Health said those contracts will be needed to ramp up services in the event of future viral surges. Without that vendor support, APH said it can handle about 200 tests and 250 vaccinations daily as it looks to wind down its larger vaccination efforts in favor of a smaller-scale, community-oriented strategy. The actions also come as Austin-Travis County Health Authority Desmar Walkes is warning residents that COVID-19 risk indicators are once again rising to "concerning" levels in Central Texas.

APH will continue to adjust its strategy and spending as time goes on, according to officials.

"Our response has evolved along with the virus," an APH spokesperson said in an email. "The novelty of this pandemic challenged our ability to anticipate and proactively address unforeseen circumstances. The last two years we’ve simultaneously responded to current needs while also planning for future surges. We learned we need a stronger local public health infrastructure to fill the gap between the need and when state or federal help arrives. During a global pandemic, federal resources are stretched thin, and we must be positioned to respond with existing resources if need be."

The list of new programs and services rolled out by APH since early 2020 is long with several elements also supported with federal dollars. Those initiatives include local testing sites, a mobile vaccination program targeted in areas with lower vaccination rates, assistance hotlines, an online self-service portal and public communication efforts.

APH also said it will use some ARPA funding to roll out a new disease surveillance system that would more efficiently track lab data and dozens of patient conditions in anticipation of any major public health crises in the future.

However, the health department also said that outside funding will be key to responding to potential events beyond COVID-19. APH is pursuing "creative ways" to secure those dollars, which could come at a "significant investment" from its staff and infrastructure.

"Like many local health departments, APH is heavily dependent on grant dollars. Without continued unrestricted funds, our ability to quickly respond to future emergencies will continue to be limited," the spokesperson said.

While much of Austin's pandemic spending has been directly focused on related public health work, city officials have said they are also aiming the “historic” amount of federal ARPA dollars received at many other economic, health and safety initiatives given.

City Council voted June 9 to appropriate the remaining $94.28 million of the city’s $188.5 million for other work, including support for the city’s creative sector, food access and workforce development.

On June 16, council also sent millions in funding related to COVID-19 toward rent support for tenants affected by the pandemic, including $1.05 million in assistance from the U.S. Department of the Treasury.

More than half of Austin’s ARPA allotment was directed to homelessness last spring, with just under $5 million spent so far. Much of the remainder is expected to go out this year through larger contracts for housing and supportive services. 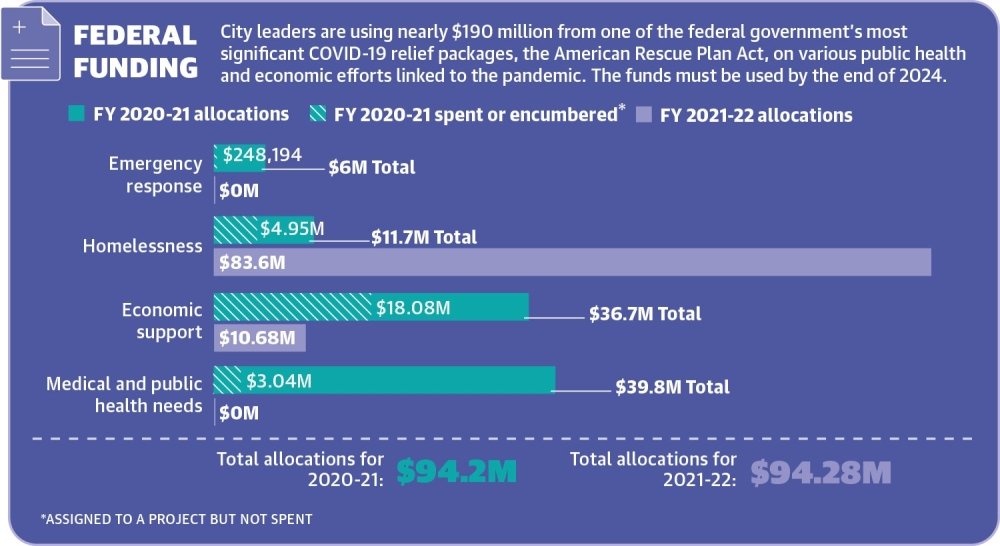