The Austin-area housing market this spring has experienced high demand, skyrocketing home prices and a shaky inventory outlook as jobs and new residents continue to flow into the area.

Those trends laid out in May's regional housing market report from the Austin Board of Realtors follow months of similar movement that have prompted some concern from city officials who view the situation as bringing an uneven effect on many of Austin's lifelong residents.

During a June 15 meeting of City Council's Housing and Planning Committee, District 4 Council Member Greg Casar—also the committee's chair—commented on ABoR's most recent evaluations showing an approximately 24% jump in Austin home prices between this January and May as an "alarming" element of the local housing affordability equation.

“The median sales price has gone up $111,000 since just the beginning of the year, which is just really shocking and really a terrible thing for people trying to buy a home in our city, and trying to afford and be a part of our city," Casar said. 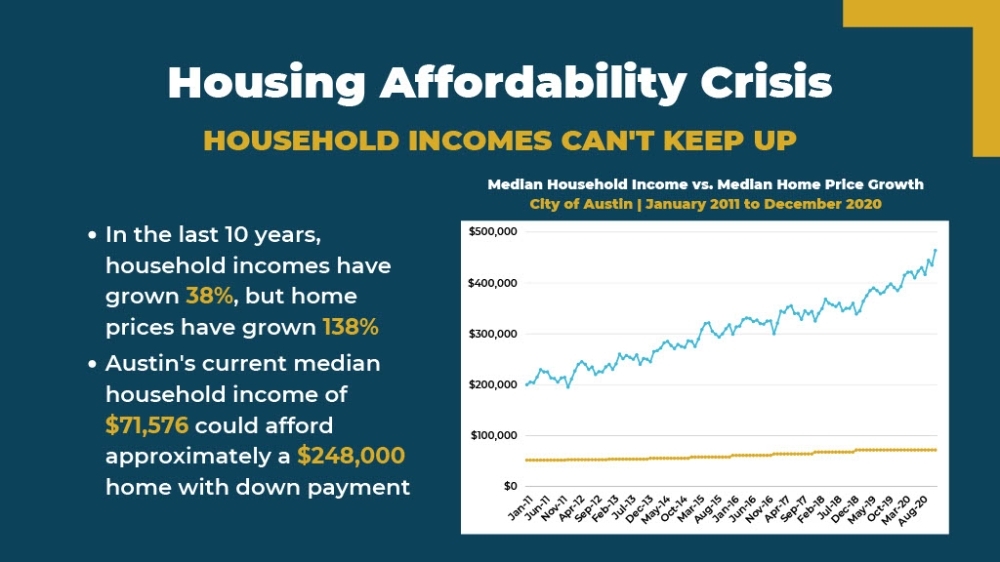 Jeni Williams, ABoR's deputy director of government affairs, said during the committee meeting that the continuing trends remain rooted in the issues of supply and demand, rather than a speculation bubble, as inventory remains "critically low" and homebuyers of all ages seek to take advantage of low interest rates and a hot market. Williams also said the market is a "paradox" in the national housing conversation given its relative affordability for outsiders from pricier metropolitan areas such as New York City or San Francisco, while home price increases locally have far outstripped gains in the city's median household income over the past decade.

“Folks who are moving here from elsewhere or those looking at our market from the outside think it’s affordable still ... but those of us who have lived here for a long time, those lifelong Austinites, people who have lived here even just a handful of years, it’s becoming increasingly unaffordable for that population," Williams said.

In addition to the current pricing situation, with median home prices in Austin surging past $500,000 in a matter of months, Williams said the statistic that remains "most troubling" to ABoR is the critically low home inventory timeframe that now sits at just two weeks. That represents the window in which the market would run out of available houses if new homes were not added; Texas A&M University's Texas Real Estate Research Center has said a "balanced" inventory requires at least six months of supply. 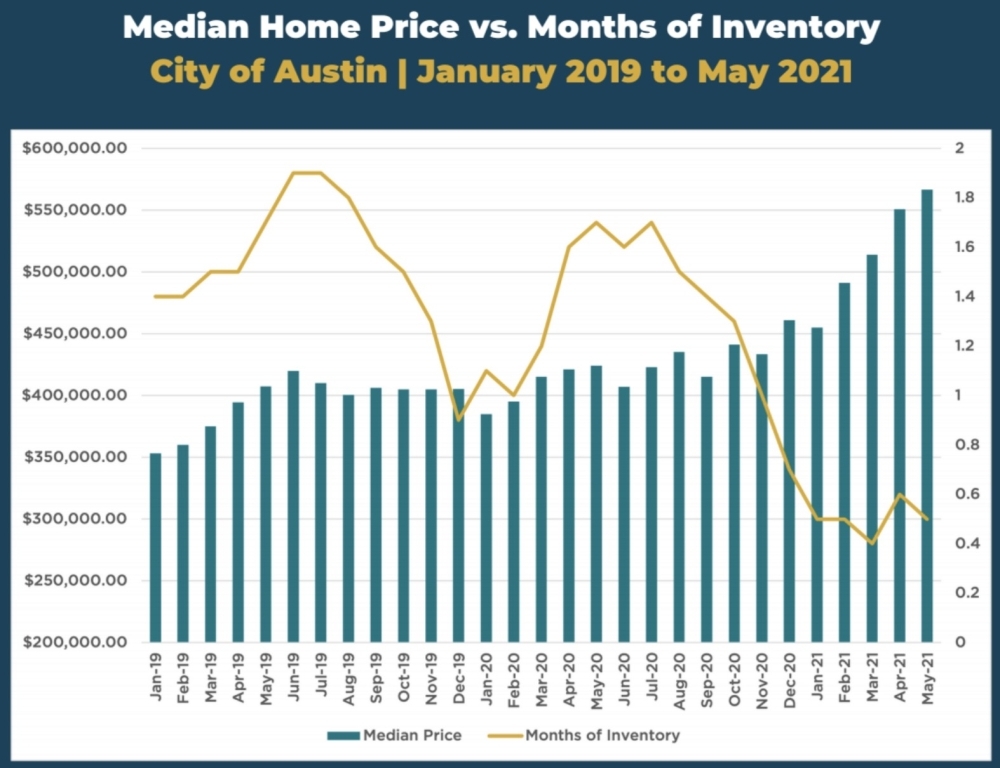 "When inventory was somewhat stable hovering above one month, prices were rising. They were rising at between 6[%] and 10% year-over-year on average—sometimes they went down a little bit—but ever since we reached below one month of inventory in December of 2020 they have really skyrocketed because of the disparity between available homes and the demand," Williams said.

District 8 Council Member Paige Ellis, who said she lives in an apartment, also spoke to the relationship between the market's more direct effects on home buyers and owners and costs for renters. Ellis said she now has concerns over the worsening outlook for first-time homebuyers in the Austin area given the upward tracking of home prices, and whether renters will be able to successfully move into homeownership.

Williams and ABoR CEO Emily Chenevert said possible actions Austin officials could take to mitigate the path toward even higher prices and lower inventory include considering ways to speed up the city permitting process, and to examine a wider variety of housing types in the market.

"Diversity of housing types that meet people where they are and allow them to live in the place where they want to live will allow more supply to come online," Williams said. "The prices, unfortunately, likely are not to go down, but to increase less.”

Casar said he hopes council will dig deeper into the question of how the city can affect housing diversity and availability following its summer meeting break. City Council's next official gatherings are scheduled in the last week of July, and the Housing and Planning Committee will next meet in September.