Greener on the other side? Amid population growth and historic divides, Austin organizations work toward park equity 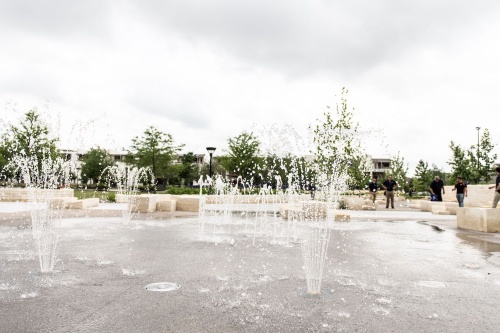 Mueller hosted a grand opening of Branch Park on May 17. It features splashpads, which area residents requested.

The Ann and Roy Butler Hike-and-Bike Trail, a 10-mile loop around Lady Bird Lake, is unique in that it reaches from the west side of Austin to the east.

Separated by the few dozen blocks that make up downtown Austin, the two sections of town have historically been split along racial and socioeconomic lines.

The needs from one end of the trail to the other can be very different, said Heidi Anderson, executive director of the Trail Foundation, a local nonprofit that has overseen improvements to the Butler Trail.

The Drake Bridge Commons will be developed underneath the north end of the Drake bridge, which runs across Lady Bird Lake from City Hall to South First Street.

The foundation has been collecting community input on the project for months, and users—who tend to be people who work and live downtown—want a lot of infrastructure, including lighting and walking surfaces along the water’s edge.

“It’s a very designed and engineered space,” Anderson said, as a result of this feedback.

A couple miles east, the foundation is working on collecting community input on another project, which will see the decommissioned Holly Street Power Plant at Festival Beach redeveloped as parkland connected to the Butler Trail.

“What we’ve learned from that, and it has been just a little bit surprising, is that the community does not want in that space something super designed,” Anderson said. “They want it to stay fairly natural.”

The Trail Foundation is one of a number of local nonprofits working to improve park equity in Austin, which is exacerbated by historic inequity as well as by continued population growth.

But what is park equity?

And how does Austin compare to other cities?

Since 2012, the city has fallen from 19th best for park access among the country’s 100 largest cities to 43rd this year, according to ParkScore, an annual index compiled by the Trust for Public Land, a national nonprofit.

In more concrete terms, this means more than 40% of Austinites do not live within a 10-minute walk of a public park, per ParkScore, and the total spending per capita here is $119.18, compared to $270.40 in top-ranked Washington, D.C.

Improving park access is a goal of the city’s and its parks and recreation department.

In addition to overseeing Austin’s 300 parks, PARD has developed training programs to prepare youth of color for employment opportunities in the department; worked with Austin Public Health to use data to help develop programs for underserved markets; and advertised job opportunities in publications and social media pages that serve communities of color, according to a city equity assessment of the department conducted in 2017.

But there is still work to do.

“Nature is not a luxury, it’s a necessity,” said Addie Broussard, a program coordinator at the Children in Nature Collaborative of Austin. The Trail Foundation is a local nonprofit that maintains the Ann and Roy Butler Hike-and-Bike Trail along Lady Bird Lake.[/caption]

The role of history

A 1928 master plan divided the city “along racial lines by moving community services for African Americans and Hispanic/Latinx residents to East Austin,” according to the city equity assessment.

In practice, this meant black and Latino Austin residents who tried to live elsewhere could be denied city services, including utilities and access to public schools.

In comparison, in the 78703 ZIP code, in West Austin, the life expectancy is 85.5 years—a difference of nearly a decade.

While park equity may not seem relevant to these statistics, environmental justice experts argue it is a critical influence.

“It’s all intersectional,” said Karen Magid, direct of sustainability and STEM—science, technology, engineering and mathematics—for Huston-Tillotson University’s Center for Sustainability and Environmental Justice. “It’s affordability and transportation and food access. It all intersects. I don’t know that I count it as so separate from something that would be more traditionally environmental, like water quality of air quality.”

The city has said it is working to address these disparities, focusing on equity in a number of its policies and departments—from the ongoing rewrite of the land development code to the formation of a citywide equity office in 2016 to the three-person inclusion unit at the parks and recreation department. The Austin Parks Foundation helped fund the redevelopment of St. John Park. A ribbon-cutting ceremony was held on March 19.[/caption]

A common thread among parks projects in Austin is community engagement. From the city to area nonprofits, organizations are working to incorporate what the users of that land most want from it.

“It’s not that we’re necessarily going into a neighborhood and telling them what project is best for their community,” said Ladye Anne Wofford, chief mission officer for the Austin Parks Foundation.

In recent years, the organization has focused its work in the eastern crescent, where data indicates the need for parks and park improvements is most severe.

In 2018, APF allocated more than $1 million to parks in historically underserved communities.

“Park equity is something that our team is thinking about each and every day,” Wofford said.

As a result of APF’s community engagement efforts, the organization launched its park design services program in 2018, which provides free park and landscape design services to grant applicants interested in funding to improve their local parks.

“One of the barriers that we saw for community members who wanted to improve their parks was access to free or low-cost landscape design or architecture,” Wofford said.

This program helps address an advantage that might exist in wealthier communities, where a neighbor might be willing to offer free landscape design services or to raise money to hire one to help with the grant application. Waterloo Greenway is a forthcoming parks district that will track along Waller Creek from Lady Bird Lake to 15th Street.[/caption]

Waterloo Greenway, formerly Waller Creek Conservancy, is a local nonprofit working with the city of Austin to develop a 1.5-mile parks district from Lady Bird Lake to 15th Street along Waller Creek.

While the first park in the district, Waterloo Park at Red River and 15th streets, will not open until 2020, Waterloo Greenway staff have been soliciting community feedback for years.

Waterloo Park, for example, will feature a food truck court, rather than a cafe, which was the original plan.

“That came specifically from community feedback,” said Meredith Bossin, director of engagement at Waterloo Greenway. “One, just the informality of it, the way that it would be reflective of Austin’s culture, the fact that you could have multiple vendors that would have different price points and be reflective of different cultures and traditions.”

In addition to outreach, the staff at Waterloo Greenway has worked to consider barriers that could prevent Austinites from accessing the park—whether because of disabilities, homelessness or transportation—or feeling welcome once there.

The name Waterloo Greenway is meant to focus attention on the place, rather than the conservancy behind it, and was informed by the staff’s effort to learn the history of the area.

“A decision that we made … looking at the history of Edwin Waller [the first mayor of Austin, for whom the creek is named] and his history of enslaving people and owning slaves, we made a decision to move away from that and establish our own legacy,” said Melissa Ayala, community engagement and government relations manager at Waterloo Greenway.

Like the Trail Foundation and Waterloo Greenway, the Mueller development represents a partnership between a private company—in this case, the developer Catellus—and the city to invest in public services, parkland among them.

Nearly 20 years ago, Catellus began working with area neighborhood groups to plan the redevelopment of the former Mueller airport property in Northeast Austin.

Today, 20% of the mixed-use development’s 700 acres are parks and open space, a ratio that Catellus Executive Vice President Greg Weaver said was the byproduct of neighborhood organizations working closely with the city and developer to achieve their goals for the project.

“That’s not a normal ratio for parks to development,” he said.

The Mueller parks—there are eight, plus another in development—are maintained by the local homeowners association and open to the public.

Despite this investment, it took time for some of the surrounding community to discover the parks.

“There’s this perception that they’re private parks,” Weaver said, attributing this on the one hand to the trend of master-planned communities building great parks and then fencing them in and on the other to a long history of the east side being underserved.

To spread the word, Catellus put up signs around the development that read “Public park →” and developed new programming to bring people in, such as a weekly farmers market.

Mueller parks, like the Butler Trail and the many city parks that have been redeveloped with APF grants, exist because of private investment in public land, something that Austin will continue to need more to achieve park equity.

“I don’t think people understand the extent of the funding needs,” Wofford said. “[The parks] get loved to death.”