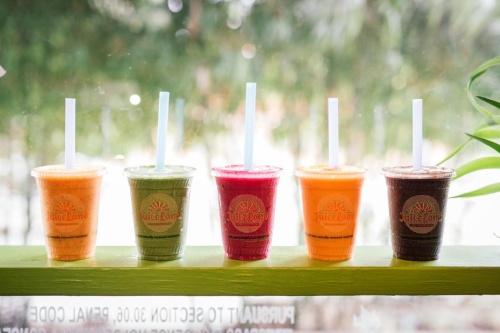 JuiceLand is one of many local Austin businesses working to replace plastic straws with more sustainable options.

A targeted campaign to reduce the use of plastic straws to prevent ocean waste and protect marine life has spread across the country, reaching the banks of the Colorado River.

A number of Austin businesses, including Alamo Drafthouse, Stubb’s, JuiceLand, Tacodeli and the Vortex, have introduced policies that reduce or eliminate use of plastic straws.

Some worry, however, that such efforts will have only a marginal effect on pollution worldwide and wildlife preservation; others are concerned that straw bans will inadvertently hurt people with disabilities, who may rely on straws to drink.

This decision came on the heels of a campaign called Strawless in Seattle, organized by the nonprofit Lonely Whale, which encouraged local businesses to find alternatives to single-use plastic straws, using the social media hashtag "#StopSucking" to encourage the effort.

According to nonprofit recycle Eco-Cycle, an average of 500 million plastic straws are used in the U.S. each day, which is more than one per person.

A week after Seattle’s ban took effect, coffee giant Starbucks announced it would phase out the use of plastic straws by 2020 at its more than 28,000 stores around the world.

The Walt Disney Company followed, pledging to ban plastic straws by mid-2019. According to a news release, the company uses more than 175 million straws and 13 million stirrers each year.

In 2011, after two years of research and public input, Austin City Council approved the Austin Resource Recovery Master Plan. One of the plan’s goal is for the city to be zero waste by 2040, meaning that at least 90 percent of discarded materials are either recycled or composted instead of sent to landfills.

To achieve this goal, the city has enacted new recycling and composting requirements for commercial businesses, which generate more than 85 percent of Austin's discarded materials, according to a 2015 comprehensive waste study from Austin Resource Recovery.

“Nothing we use for 10 minutes should pollute our environment for hundreds of years,” Okhuysen said.

Such an ordinance may be a difficult proposition.

In June, the Texas Supreme Court overturned a city-wide ban on single-use plastic bags in Laredo, citing a conflict with a state law regulating waste disposal.

As a result of this decision, the city of Austin announced it would no longer enforce its own ban on single-use plastic bags, which it passed in 2013.

Nonetheless, many businesses have elected to enact waste-reduction policies voluntarily.

“What we are seeing, especially after the Seattle ban, is more and more businesses in Austin… [are] indicating that they’re limiting straws or only offer straws upon request,” said Gena McKinley, manager of the strategic initiatives division for Austin Resource Recovery.

Many businesses, McKinley said, are motivated to do so by cost savings and consumers who inquire about such policies.

Such efforts, while ostensibly trained on ocean health, may also have an impact closer to home.

McKinley cited a 2017 study commission by the organization Texans for Clean Water, which found that an average of 250 tons of trash are recovered from Lady Bird Lake each year, most of which washes in from streets, parking lots and storm drains. Per the same study, more than 70 percent of such trash in Texas is micro-litter, which includes straws.

As in Seattle, local businesses in Austin have taken the lead on this issue, implementing new straw policies on their own accord.

Barley Swine, a restaurant in North Austin, began offering compostable straws at the beginning of the year and has received positive results, according to a spokesperson.

The restaurant has been composting since it opened in 2010; next up on the agenda is finding a vendor that sells compostable gloves.

"[C]urrently it's hard to keep the orders consistent because so many restaurants want them," the spokesperson said.

This spring, Stubb’s eliminated its use of plastic straws.

Black-box theater The Vortex, which is also home to the Butterfly Bar and food truck Patrizi’s, did the same. Corn-based compostable straws are available upon request.

“We’re a non-profit theatre company, and we feel very strongly about being good stewards of the environment,” Vortex Managing Director Melissa Voigt said in an email.

And shortly after Starbucks’ announcement, Alamo Drafthouse unveiled two new initiatives. The movie theater company now offers straws by request only, and more than half of its 35 locations nationally are switching to corn-based biodegradable straws.

The bar and restaurant Holy Roller in downtown Austin offers straws made out of hay by request, according to executive chef and owner Callie Speer. For its frozen beverages, it offers reusable steel straws.

Other local businesses are still fine-tuning their straw policies.

Meanwhile, JuiceLand offers a 10-cent sustainability discount to customers who decline a straw with their drink and a 50-cent discount for those using reusable tumblers. It also sells reusable steel smoothie straws at all of its locations, per Marketing and Graphic Design Specialist Lexie Shook said in an email.

Fast-casual restaurant Tacodeli recently removed plastic straws from its drink stations and placed them behind the counter, where they are available upon request.

This decision came from feedback from customers and employees, according to Tacodeli Marketing Director Richard Pennock.

“[I]t is clear that many are conscious of and concerned by the negative impact of straws,” Pennock said in an email.

But others still ask for them, he added, which is why the company continues to keep some on hand.