Austin voters rejected Proposition A and its mandated increase to the Austin Police Department's force in the Nov. 2 election.

Election night results out of Travis, Williamson and Hays counties show the proposition failing 31.82% to 68.18%. The proposition would have set a new APD staffing requirement of two officers per 1,000 city residents at an estimated cost of tens of millions of dollars annually.

Opposition grew slightly since early voting totals were released earlier in the night, with a total of 106,232 ballots cast against the measure across all three counties versus 49,580 votes in favor. Election results are unofficial until canvassed.

At an East Austin victory rally, city officials and members of the No Way on Prop A coalition said the apparent election outcome stemmed from residents’ satisfaction with public safety in the city, and a push against further increases to APD’s record budget at the possible expense of other city departments.
RELATED STORIES

• Greg Casar to run for Congress, continue to serve on Austin City Council into 2022

• With Proposition B's passage, this property could become Austin's next waterfront park

“I really do think that Austin values and culture were on the ballot tonight,” Mayor Steve Adler told Community Impact Newspaper. “The community reaffirmed that what we need is a comprehensive approach to public safety. That means fully staffing the police department—and we have work to do there—but it also means paying appropriate attention to fire and EMS and mental health first response. I think the vote reflects that people feel safe in Austin, and we know we’re one of the safest big cities in the country.”

District 4 Council Member Greg Casar said the vote also represents a desire for policing changes among city residents. During remarks at the No Way rally, Casar pointed to APD’s longtime mishandling of rape kits and sexual assault cases, injuring of protesters during last year’s policing and racial justice demonstrations, and ongoing calls for public safety reforms as setting the groundwork for the election result.

City staff this year estimated Proposition A could cost Austin between $271.5 million and $598.8 million over five years, figures they said would have required either a tax rate election or budget cuts to other departments to fund. That projection was frequently referenced by No Way members, including Austin’s fire and EMS associations, as a top reason to rebuff the proposal.

"We're not going to save Austin now tonight, but we will. I promise you, we will," Save Austin Now co-founder Matt Mackowiak said at the organization's watch party. 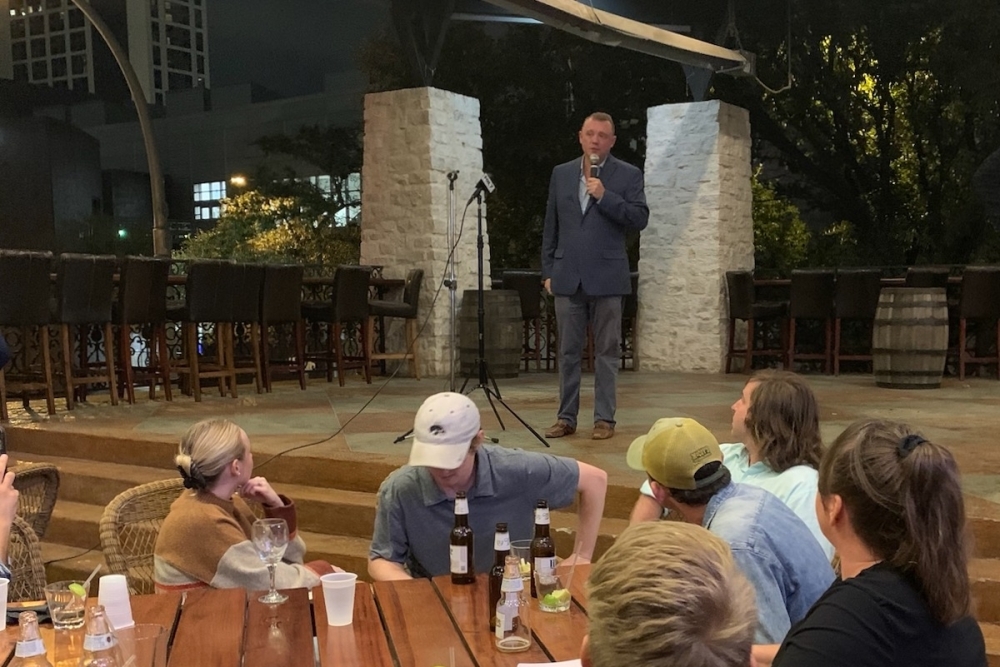 After successfully engineering this spring’s vote to reinstate a citywide camping ban, leaders of Save Austin Now—which led the petition drive to get Proposition A on the ballot—said they were disappointed in the Nov. 2 vote given lingering safety concerns.

"We thought more people in the city were going to demand that we have an adequately staffed police department. We thought they would demand more training and more community policing and significant reforms. In the end, they were convinced by the other side that this is something the city could not afford, that this is something the city doesn't need, and everything's fine,” Mackowiak said.

"No matter what the verdict of this election, we absolutely support police, and we are not going anywhere,” Petricek said.

In a statement posted on social media, the Austin Police Association, a backer of Proposition A, thanked supporters for voting for the measure and called on city officials to ramp up ongoing staffing efforts at APD.

“The steps moving forward are up to the mayor [and] City Council to get much needed cadet academy classes going and start the rebuilding for the future of the Austin Police Department,” the association said. We kept hearing Mayor Adler [and] council members say the budget already exists to hire 300 more officers, so let’s get to work and get the process moving forward.”

Following an extended pause amid investigations into its toxic culture, APD’s cadet academy rebooted this spring with a class of 100 potential new officers, which has since fallen to 75 remaining cadets. Pending the outcome of the trial “reimagined” academy, more classes could launch throughout 2022, an approach Adler said he believes is the best way to bolster the police department’s ranks.

“Our current budget has more being spent on the police department than ever in the history of this city, $10 million more. We have 200 funded but unfilled positions, and we need to get them filled. But we also needed to fix the cadet class that was broken in so many respects,” he said.

Olivia Aldridge contributed to this report.

Visit our online Voter Guide for all local election results in your community.

With early voting results in, Austinites are leaning against a mandated staffing ratio at the Austin Police Department with 66.47% of the votes against Proposition A in the Nov. 2 election.

Around 85,022 Austinites voted on Proposition A during Travis County's 12-day early voting window, with an additional 3,789 from early voting in Hays and Williamson counties. A total of 29,775 ballots were cast in favor of the proposition and 59,036 against.

If approved by voters, Proposition A would mandate that APD be consistently staffed at a level of two police officers per 1,000 city residents, well above the department's current staffing ratio. The proposal also features provisions for the use of officers' time on the job, a ramp-up in APD cadet academy classes and public safety training for city officials and staff. The proposition proved to be the more contentious of the two ballot items in Austin this fall, with well over $2 million total raised for and against the measure.

Based on APD's staffing total as of Oct. 1 and the city's population as tallied in the 2020 Census—newer figures are not yet available—Austin presently has an estimated 1.68 police officers per 1,000 residents.

Proposition A would immediately go into effect if passed, although city staff estimated that reaching the staffing floor would take several years given funding and training needs. Estimates from city of Austin CFO Ed Van Eenoo released earlier this year project the proposition's cost at between $271.5 million and $598.8 million over a five-year span, depending on local population growth and police pay increases.

Van Eenoo has said the measure's staffing requirement and a provision that officers spend at least 35% of their time on "community engagement," or uncommitted time, would be its most costly aspects. Those items, as well as the construction of new APD facilities to accommodate hundreds of new officers, total between $248.8 million and $571.8 million of Van Eenoo's two cost projections.

Proposition A was backed by political action committee Save Austin Now—the group behind this spring's successful push for a reinstated public camping ban—and the Austin Police Association. Representatives of both organizations have pointed to APD's continued understaffing, as well as Austin's rising 2021 homicide count and lagging police response times, as the top reasons that a firm officer ratio is needed. District 6 Council Member Mackenzie Kelly and former mayors Ron Mullen, Lee Cooke and Lee Leffingwell also endorsed the proposition in early October.

APD's force has not reached the department's budgeted staffing limit since at least 2018, even after that number was decreased in 2020. And public safety has been a major focus of both newly-chosen police chief Joseph Chacon, the city and the backers of Prop A, as Austin's 2021 homicide rate continues to exceed last year's. Austin had recorded its record 77th homicide of the year as of Nov. 1, according to Chacon, compared to 48 in all of 2020.

Opposition to the measure, headed by the No Way on Prop A campaign, has centered around budgetary concerns and whether more police can solve problems such as a spiking murder count. Detractors also say the proposition's cost burden would likely eat into the budgets of other general fund city departments including fire, public health, parks, and library. Prior to Election Day, Van Eenoo said the city's funding of Proposition A requirements would come either from a voter-approved tax hike, or if that fails, cuts to those general fund departments.

Mayor Steve Adler and the rest of City Council have spoken out against Proposition A, with all Travis County commissioners, several Central Texas legislators and five former council members joining the political resistance to the measure. Austin's fire and EMS associations and a range of political, activist and other local organizations also joined the No Way on Prop A coalition.