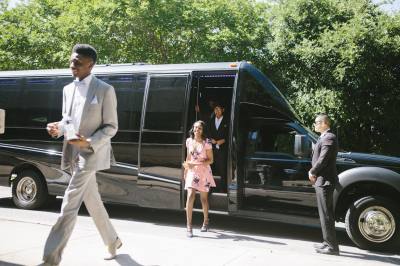 Breakthrough Central Texas students from Austin ISD and Manor ISD celebrated their graduations in May.

On the morning Saturday, May 5, a group of high school seniors from Austin ISD arrived at St. Edward’s University. The students hopped out of a limousine and walked into the college for a ceremony to commemorate their upcoming high school graduation. Each one of them is aiming to become the first person in their family to enroll in college.

The ceremony was held by a program called Breakthrough Central Texas, a nonprofit organization that provides resources starting in sixth grade for children to become first-generation college students.

Breakthrough celebrated 92 students from Austin ISD and Manor ISD who will become first-generation college students, but CEO Michael Griffith says for many students both here in Central Texas and around the state, college remains a significant barrier.

The Texas Higher Education Coordinating Board tracks data for students statewide from 8th grade through higher education. According to the most recent 8th grade cohort data, 53 percent of students in the 16-county Central Texas region enrolled in two-year or four-year higher education institutions. For economically disadvantaged students, that number drops to 35 percent.

“We’re really stuck in a hard place and needing some shifts in the way we approach this to achieve success,” Griffith said.

The THECB has recognized direct-to-college enrollment as an issue that needs to be addressed statewide. The board’s 60x30 strategic plan aims to have at least 60 percent of Texans age 25-34 to have a certificate or degree by 2030. In order to achieve the 60x30 goals, 65 percent of high school seniors would have to enroll directly in college in 2030.

In the fall of 2016, 52 percent of high school graduates enrolled directly into college, a decrease from 53 percent the previous year.

“We don’t know if that’s a trend or simply an anomaly but it’s certainly an issue of concern,” said Commissioner of Higher Education Raymund Paredes at an April 26 THECB meeting.

Austin ISD assistant superintendent Craig Shapiro said the direct-to-college enrollment rates locally have mirrored the state trends and remained flat. In the fall of 2017, 57.4 percent of AISD graduates enrolled directly in college in the fall of 2017.

Shapiro said the school district runs a number of programs to assist students in college preparation starting even before high school. However, both Shapiro and Griffith noted that in an economically disadvantaged community, one small unexpected life change can shift an already precarious balance and make college less of a priority.

“There’s so many family situations (that factor in the) decision making. It’s not an automatic, for good reason in some cases. Even with the best of intentions, things can change financially as people lose jobs or move or have family situations,” Shapiro said.
SHARE THIS STORY