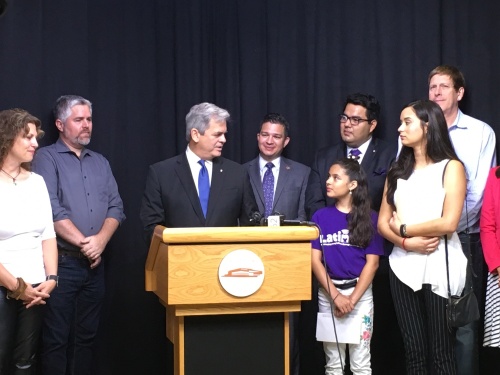 In response to the #MeToo movement, male leaders across Austin’s media, tech, political and entrepreneurial industries pledged their support to Latinitas, a local nonprofit that empowers local Latina youth, with a focus on digital media and technology training.

Adler commended Latinitas’ work in the community and the organization’s effort to engage local male leaders, many of whom were looking for ways to act in response to what he called the "#MeToo revelations."

“We want to continue to reject [the] institutional racism and the institutional sexism that keeps some groups from these opportunities in our city,” Adler said.

Over the last 16 years, Latinitas has served more than 30,000 girls through clubs, camps, workshops and conferences.

Donnelly added, however, that the organization has “a long way to go.”

“There’s a sharpened rhetoric that puts down the immigrant, female and bicultural communities we serve,” she said.

Rodriguez, president of the GAHCC, said Latinitas serves Austin's "future workforce," citing that over 68 percent of Austin ISD students are Hispanic, and the majority are young women.

Among them is Emily Alpuche, a rising sixth grader at Kealing Middle School in East Austin who has been involved in Latinitas for three years.

An aspiring screenwriter, she learned to film, edit, code and report through Latinitas' programming.

“I’ve also become more confident in public speaking,” Alpuche said at the press conference, where her head barely rose above the podium.

A network of mentors

Latinitas relies on male allies, as well as its network of female mentors, to expose its students to new industries and career paths.

Karen Siles, a manager at IBM, works with Latinitas students.

She said a similar organization in Northern Virginia, where she was raised, set her on this path.

“At the time, I had no exposure to engineering or math or science,” Siles said.

As part of the program, however, she took a vector mechanics class taught by a college student from Argentina who was studying electrical engineering.

“I remember telling myself, ‘I want to be like her,’” said Siles, who is originally from Bolivia.

The representation of women and people of color is crucial to diversifying industry leadership, she said, as is support from male colleagues.

“I’ve been at IBM for over 10 years, and my career there has really accelerated because of a male ally."

Latinitas will honor its male allies at its annual fundraiser, the Party for Chica Power, on June 16. The event will be held at the Austin Public Library from 6:30 to 10:30 p.m.