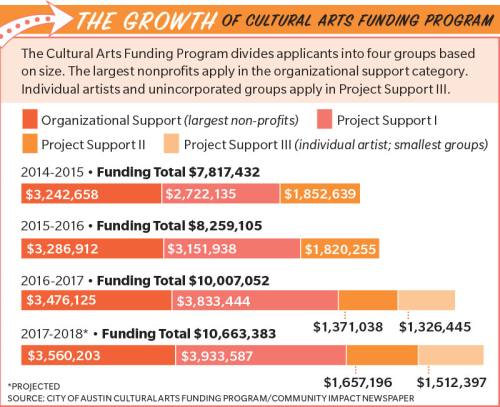 Fourteen years ago, when Jesús Pantel started working for the city, Austin still had a small-town feel.

Since 2004, Pantel has been working as contract compliance specialist for the Cultural Arts Funding Program. His job is to provide local artists and nonprofit organizations with information and guidance to help them navigate the process of applying for city funds provided through the hotel occupancy tax.
When he started, the city had somewhere between $2 million and $3 million per year allocated to the program, split among fewer than 200 nonprofit organizations who signed contracts.

The growth of the tourism industry has benefited artists, but Austin Creative Alliance CEO John Riedie points out that the arts also benefit the hotels. “The cultural vitality of this city is what’s causing the market for the hotels,” Riedie said.

Just before the South by Southwest Conference and Festival, Austin’s largest hotel opened its doors. The Fairmont Austin is 598 feet tall with 1,048 rooms, 36 more rooms than the JW Marriott.

Michael McMahon, Fairmont Austin director of sales and marketing, said hotel executives and the developer recognized a market that was loaded with demand, too low on supply and an attractive destination for visitors.

According to data from San Antonio-based hotel consulting firm Source Strategies, 5,772 hotel rooms were added in the city between 2012 and 2017. That is 2,566 more than the number of rooms added in the 10 years prior. In the last eight years, the city’s hotel occupancy tax revenue has nearly doubled, from $46.8 million in the 2010-2011 fiscal year to an estimated $93.3 million in FY 2017-18. There are plenty of reasons those visitors fill hotel rooms downtown. Dewitt Peart, CEO of the Downtown Austin Alliance, says he hears from tourists that Austin’s downtown is safe, clean and walkable. Justin Bragiel, general counsel for the Texas Hotel & Lodging Association, pointed to the Austin Convention Center and Visit Austin as important drivers of the hotel and tourism economy.

But city staff, those in the nonprofit arts scene and hotel representatives agree that arts and culture are a significant driver of Austin’s new businesses, residents and tourists.

“It’s the backbone of who we are as a community. It’s what made us the weird and wacky place that we all want to call home,” said Tina Cannon, vice president of local government relations at the Greater Austin Chamber of Commerce.

The benefits of the program

Today, many nonprofit arts institutions rely on the CAFP as their largest individual supporter.

“For us, it represents nearly 20 percent of our annual operating budget. It’s a critical part of our support,” said Brad Carlin, managing director of the Fusebox Festival, a free, citywide arts festival that took place in April.

Austin has been funding its arts programs through the hotel occupancy tax since 1977, and for years, nonprofit arts organizations did not have many other funding options.

Lisa Rodman, the founder of philanthropic advisors group Rodman & Associates, said when she was growing up in Austin, it was a transient town where folks did not stay long, but the city is beginning to change.

“As Austin’s matured, our philanthropic landscape has matured. It’s growing roots,” Rodman said. For the last four years, Rodman & Associates has conducted a survey analyzing corporate giving in Central Texas. The 2018 Rodman Report showed that 68 percent of companies surveyed have philanthropic or giving budgets. Among that group, 61 percent saw their budget increase from 2017 to 2018.

Recently, as the CAFP’s available funds grew, city staff have attempted to broaden the reach of the program by holding workshops in different areas of the city.

So far, those outreach efforts have been successful. The total number of organizations to receive funding through CAFP’s core programs jumped from 243 in FY 2014-15 to 317 in FY 2017-18, and city staff expect that number to go up again this year. The application deadline is May 1, and council is set to approve the contracts in September.

The CAFP only funds local nonprofit arts organizations, but individual artists can apply if a nonprofit organization serves as their fiscal sponsor.

The expanding pool has led to what Carlin, who has applied for funding and served on multiple peer review panels for the city, called an “existential question”: Is it better to support up-and-coming artists and provide few barriers to entry for funding? Or to provide larger sums to fewer organizations to help them combat affordability issues in the city?

“I think there are a lot of places that would put this money into big institutions, which are an important part of the ecosystem, but this is where Austin is different. We have our grassroots arts and culture community that is so much stronger than other cities in Texas,” Carlin said.

Pantel said Austin’s City Council-appointed Arts Commission is grappling with those questions, and has created a cultural responsiveness working group to address the issues.

For now, he said, the city is in the middle. While working to attract new applications, staff have also added new programs  in addition to core funding, and they have raised the threshold of potential funding for existing applicants large and small.

Can the trend continue?

Paul Vaughn, senior vice president of Source Strategies, says supply for hotel rooms in Austin still trails demand. Even with more than 5,000 new hotel rooms added in Austin between 2012 and 2017, the occupancy rate in Austin in 2017 was 76 percent, up from 54 percent in 2002.

Revenue per available room, a key factor in determining the hotel industry’s success, was $113.25 in Austin in 2017, a figure Vaughn says is significantly higher than any other Texas city.

“I don’t think you’re going to see demand drop off. The market is still undersupplied; you’re still catching up,” he said.

At a recent CAFP workshop at the Milwood Branch of the Austin Public Library, Pantel shared some tips with the artists and organizers in the room about how best to approach the application process.

Spend time on the application, he said. Include every detail in the budget and a concise description of the mission. Hit the deadlines. Sweat the details. Because even with the fund’s pool of money growing, it’s still not enough to rely on name recognition in a fast-changing city.