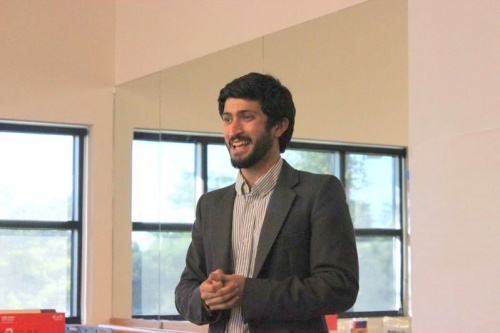 After nearly a year of development, including what he called a “very thorough” stakeholder process, District 4 Council Member Greg Casar has drafted what he calls a “compromise ordinance” that would require private employers in Austin to provide at least eight days of paid sick leave to full-time employees annually. City Council will vote on the ordinance, which is co-sponsored by Mayor Pro Tem Kathie Tovo and council members Delia Garza and Ann Kitchen, at its Feb. 15 meeting.

The drafted ordinance was made available to the public Jan. 19. Casar addressed it in more detail at a press conference Jan. 24, where he convened a panel that included Ann Beeson, executive director of the progressive statewide think tank Center for Public Policy Priorities; Pritesh Gandhi, a physician at the People’s Community Clinic; and Meaghan Perkins, direction of operations for Austin-based Beetnik Foods.

“The ordinance brought forward really is a compromise ordinance because we’re trying to bring on as many folks as we can,” Casar said.

Perhaps the most significant comprise is that the drafted ordinance requires eight paid sick days per year for a full-time employee, less than the 12 that most supporters of the policy lobbied for.

However, studies show that employees with paid sick leave take, on average, significantly less than eight days annually. Those who take more typically do so to take care of a sick child or relative.

If the ordinance is approved employers will not be required to provide rollover of or payout for unused sick days. Tipped workers will only earn their wage while on earned sick leave. An education campaign will aim to inform Austin workers of their rights.

Compliance will rely on employees filing complaints to the city’s equal employment opportunity office. If an employer does not heed the ordinance, he or she will be alerted by the city and given the chance to voluntarily comply without consequence. If he or she does not, a civil penalty with a maximum fine of $500 will be levied.

Employers who already offer paid time off policies that meet the minimum standards established by the ordinance will be considered compliant.

Despite these compromises, the panel agreed that the ordinance will still have significant positive effects on Austin’s public health.

As someone who works with the safety net population, Gandhi routinely treats patients who have to choose among paying rent, feeding their families, taking care of chronic medical issues and tending to their sick children.

“That is a calculus that [our patients] make every single day, and that is an affront to their dignity,” Gandhi said.

When Beetnik Foods began offering paid sick leave, there was some cost involved, Perkins said, but it proved worthwhile. As workers became more comfortable with the policy, no-call no-shows decreased, which minimized disruption at the company.

“This is not a question about cost at all,” Perkins said. “It’s a question of values.”
SHARE THIS STORY