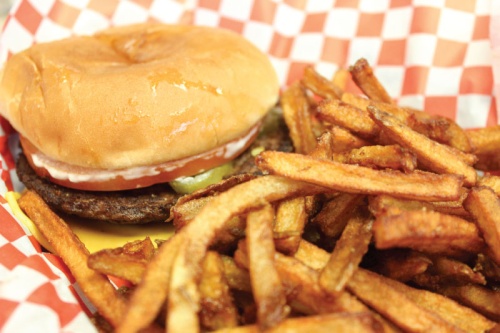 Austin has grown from a sleepy town to a big city, but Martin’s Kum-Bak Place—just blocks from The University of Texas at Austin—is a time capsule of the city’s past, owner Mark Nemir said.

Devoted to the timeless recipes that have served the hamburger joint well over its 91 years in business, Martin’s Kum-Bak remains a familiar haunt to both the old Austin holdovers and newcomers who grew up going to similar dining establishments.

“What we do is what we’ve done,” said Nemir, who has been connected to the business for about 29 years and is the second in his family tree to own the property. “We do it like we’ve always done it. That was one thing I was determined to do when I bought the place.”

That means fresh hamburger patties, making most of every food item in-house, hand-dipping milkshakes and serving cold beer, he said.

But a faithfulness to the product and its generations-deep customer base does not always mean maintaining the status quo.

The diner, known by a variety of names over the years, rebranded to its original name after a few decades of being known as Dirty Martin’s. Nemir said the “dirty” part of the name was perhaps creating a negative image.

“Actually the dirty came from [the fact that the diner used to have] dirt floors,” Nemir said. “My granddad put concrete here; there’s no foundation under ... part of the building.”

Martin’s Kum-Bak also completed a renovation of its 91-year-old space in October. The project involved enclosing its outdoor patio, adding 10 flat-screen televisions and a stage for live music as well as large picnic tables to accommodate groups and private events. The business obtained a full liquor license and unveiled a new cocktail menu after the construction project was complete.

Mixed drinks, such as the Longhorn Iced Tea ($7), Backroom Rita ($7) and the Burnt Orange Crush ($6) are now available along with draft and bottled beer.

Featuring such time-honored staples as the Kum-Bak Hamburger ($4.25 for a small), the D.H. Special ($5.50) and the O.T. Special ($5.95), the food menu keeps such customers as Ken Zarifis coming back. The Martin’s regular—he dines at the restaurant once a week by himself and once more with his family—said it brings back fond childhood memories of his favorite greasy spoon.

“It’s just a such nostalgic experience for me because it’s what I was used to growing up” in small-town Iowa, Zarifis said. “It’s a basic restaurant just wanting to serve people decent food.”