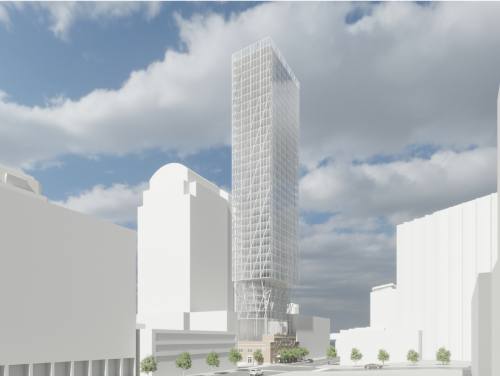 The Royal Arch Masonic Lodge, at the corner of Seventh and Lavaca streets, is the subject of a high-rise proposal.

The city of Austin Historic Landmark Commission voted to postpone a vote on whether to recommend a certificate of appropriateness—a prerequisite for building permits on historic sites—for a proposed roughly 30-story addition to the Royal Arch Masonic Lodge at its meeting Sept. 23.

The firm’s preliminary plans include a three-story glass atrium and high-rise tower atop the existing building, which would be restored in the process.

“Yes, this will be a compromise, and it will be a great big step in the preservation practices in Austin, Texas,” said Emily Little, an architect with the local firm Clayton & Little, which is working on the project.


A series of postponements

The historic landmark commission voted June 24 to postpone granting a certificate of appropriateness, pending certain changes to the project’s design. At the commission’s July 22 meeting, its members granted the developer’s request to defer a hearing a second time.

At their Aug. 26 meeting, the commissioners voted again to postpone their decision on the application for a certificate of appropriateness until their Sept. 23 meeting.

“I think we sometimes we feel pressure. People come in, and you’re not the first to say, ‘This is the way to preserve this building or protect it into the future,’ and put our feet to the fire,” Commissioner Terri Myers said at the Aug. 26 meeting. “Really, I have regretted some of the things we have approved.”

In a letter to the commissioners, Vanessa McElwrath, the board chair of Preservation Austin, urged them to work with Rhode Partners “to bring their re-development plants in line” with federal standards for historic rehabilitation.

“We feel strongly that this project, as presented, does not meet the requirements of either the Standards or City Code as they apply to the City of Austin Landmark and National Register-listed property,” McElwrath wrote.

In a Sept. 23 presentation to commissioners, Rhode Partners Director Brett Rhode cited precedents for this type of project.

Hearst Tower in New York City consists of a six-story base building, commissioned by William Randolph Hearst and finished in 1928, beneath a 46-story addition that was completed in 2006.

This new structure, atop the Arch Masonic building, would follow that example.

“Our charge, our task, is to really rise above the occasion here and do something great for this site,” Rhode said, adding that he and his co-applicants have worked to address the commissioners’ concerns about the tower addition overshadowing the original building.

Specifically, new changes include lightening the appearance of the tower, setting the tower back through the use of a more narrow portion atop the historic base, and a plan to install interior structural bracing to help protect the original building during construction and beyond.

“The idea, of course, is to lessen the presence of the tower to the person on the street,” Rhode said, so that the historic building shines.

Despite these changes, many commissioners raised concerns about the tower’s height and expressed a desire for a smaller addition.

“I think there’s probably a better fit with the way the tower structure has a way of relating proportionally to ... the building below,” Commissioner Ben Heimsath said.

Stone Development President Guy Dudley said the proposed addition’s height is necessary for the developer to break even on the project.

He also emphasized the public benefits of the new building, ranging from increased property tax revenue to required parkland dedication fees. He also spoke of the value it will add to what is currently a quiet street corner of downtown that is poised to grow more popular with the development of Block 71 across the street and the completion of the 17-story University of Texas System office building, which is catty-corner to the Arch Masonic site, in 2017.

“Flat out, we are asking for some leeway on scale,” Dudley told commissioners.

Citing concerns about the proposed addition’s height and the absence of four members, commissioners voted to postpone a vote on whether to recommend a certificate of approval for the project.

Commissioner Kevin Koch requested additional sightline studies from the applicant to provide a better sense of how the building will be experienced from street level.

The commission’s next meeting will be Oct. 28.