Mueller airport control tower recommended for historic zoning, may be opened for public use 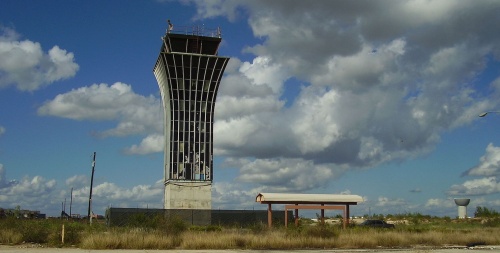 The Robert Mueller Municipal Airport control tower is one of three historic structures remaining from the property's days as the city's airport.

The Robert Mueller Airport control tower may be preserved in perpetuity and opened up to public use after the city’s Historic Landmark Commission recommended on Monday the building receive historic zoning.

The commissioners in attendance voted unanimously to recommend the more than 50-year-old, 1,024-square-foot control tower be preserved as a historic monument in Austin.

Residents of Mueller and surrounding neighborhoods referred to the 84-foot tower, characterized by its 1961 mid-century modern architecture, as an “iconic image of Mueller.” The now mixed-use development is the former site of the Robert Mueller Municipal Airport, which opened in the 1930s and closed just before the turn of the century.

The tower is currently closed to the public. However, Girard Kinney of Kinney Architects and a leader in the push for historic preservation told Community Impact Newspaper the idea is to eventually open up the tower for public use following its historic designation.

Brian Dolezal, a spokesperson for Mueller’s master developer Catellus Development, said the tower is one of three historic structures to be preserved on site. The Browning Terminal—the former hangar now home to a Sunday farmers’ market—and the former administrative office—now Mueller Central—are the others.

Although it is unlikely the Mueller Central building can receive official historic zoning due to renovations, Dolezal said there is a talk about trying to designate the Browning Terminal.

Monday night’s vote only secured a recommendation. The historic zoning will now have to go through the city’s Planning Commission and City Council.