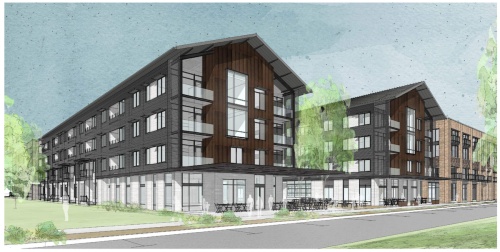 A new 390-unit apartment is coming to the Highland neighborhood.

A new mixed-use development is the latest project coming to the Highland area around Austin Community College.

The newest venture for RedLeaf Properties, which is revitalizing the area around the former Highland Mall, is a 390-unit apartment complex with about 25,000 square feet of ground-floor commercial space, according to a news release. RedLeaf is partnering with Greystar Real Estate Partners on the development.

Amenities include a resort-style pool with outdoor living spaces, a dog-walking area, a fitness center, a multi-purpose community room and parking garages. Thirty-nine of the 390 units will be affordable, according to the release.

Construction is slated to begin later this year, and the first units will be move-in ready about 18 months after the start of construction. The mixed-use development is designed by Lake|Flato and Meeks+Partners.

“We’re excited about this development, which will bring even more housing opportunities, including more affordable housing, to a part of town that already has great transportation options,” said RedLeaf Principal Matt Whelan in the release.

ACC president and CEO Richard Rhodes called the project "an important investment in the future of the college and community."

In 2009, Whelan formed RedLeaf Properties and partnered with ACC to revitalize the area around Highland Mall into a master-planned development.

ACC completed the first phase of its Highland campus transformation three years ago and recently opened its new bioscience incubator. New art studio and classroom space, new faculty offices and a regional workforce innovation complex that includes a STEM simulator lab, a culinary arts and hospitality center, a student-run restaurant, a digital creative media center, a performing arts center and a professional business incubator are also planned in the next three years.

RedLeaf’s first Highland mixed-use development, featuring about 300 residential units, a parking garage and about 5,000 square feet of retail and dining, is under construction, and a new park is slated to be completed by summer, with walking trails and a community garden.

Surrounding shopping centers such as The Linc, formerly called Lincoln Village, and The Crescent, previously Highland Village, are also seeing growth, with restaurants such as Easy Tiger Bake Shop & Beer Garden and grocery stores such as 99 Ranch Market opening later this year.

“There’s a lot happening now and on the horizon at Highland,” Whelan said. “We’re busy bringing on board new residential, new office, new retail and a new park while ACC is busy transforming the former mall into premium education space for its students and faculty."