Correction: Several quotes from Austin City Council Member Ann Kitchen were attributed to Travis County Commissioner Ann Howard in the original version of this story. This post has been updated to reflect the statements were made by Kitchen. A clarification has also been added regarding Austin Public Health's FAQ page, which is active and continues to be updated.

After hearing from local residents who qualify for COVID-19 vaccines reporting difficulties signing up for a limited number of appointments through Austin Public Health's portal, local government officials are discussing possible solutions.

“What I'm hearing is that there is a great deal of anxiety and confusion, and a sense of unfairness about the way that the system works right now, to sign up at Austin Public Health,” council member Ann Kitchen said. “There’s a sense that there’s a lottery system right now.”

Austin City Council and Travis County Commissioners Court members are pushing for an easier-to-navigate coronavirus vaccine registration portal through APH. The two bodies, which have begun meeting in weekly joint sessions to hear updates on the local status of COVID-19, on Jan. 26 discussed possible reforms to APH’s registration system that would ensure it runs smoothly once distribution widens to the larger population and even larger numbers are using the portal.

According to APH Director Stephanie Hayden-Howard, the portal does not implement a lottery system, but a first-come, first-served process among qualified, preregistered individuals belonging to Phases 1A and 1B of distribution—those being frontline medical workers, nursing home residents, people over age 65 and people with certain high-risk medical conditions. This week, for instance, APH expects to receive 12,000 more additional doses of the Moderna vaccine and to correspondingly offer more appointments through the portal. All prequalified portal users will be sent an email inviting them to sign up for an appointment as soon as new appointments are posted—but those people will have to act fast, since there still likely will not be enough appointments to go around. Generally, those emails go out on Mondays and Wednesdays, Hayden-Howard said.
RELATED STORIES

• After budget cuts, police cadet classes could start in spring

“It does fill up really quickly,” she said. 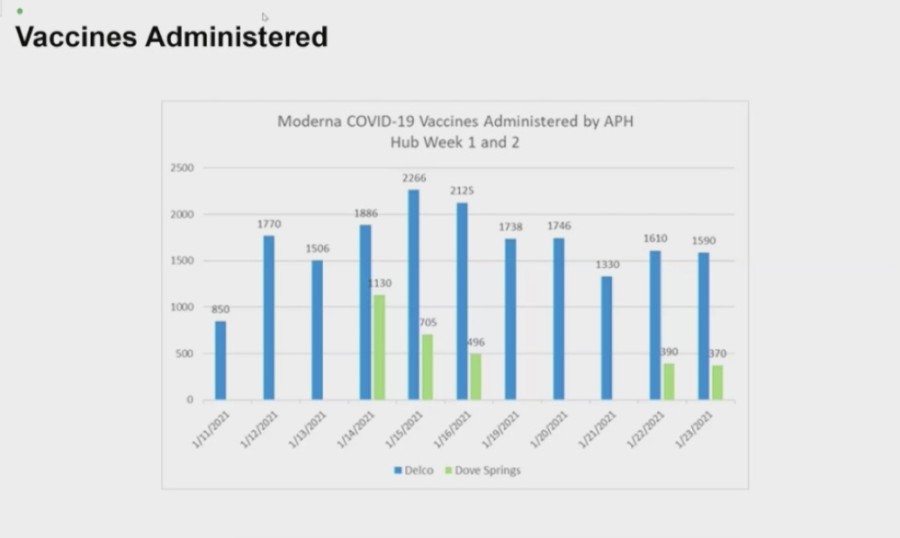 The APH portal, which operates through a platform called Salesforce, has had its share of glitches since going live earlier in January, APH leaders have acknowledged. For instance, some users have run into login issues, for which Hayden-Howard recommends a workaround of adding “.aph” to the end of usernames. Such issues may be especially difficult for older users to troubleshoot on their own, Kitchen suggested.

“It also would be helpful if we had a high-capacity help and support function,” Kitchen said. “What pops up is a chat that says, ‘How can we help you?’ And real time, right there, you can get help.’”

Kitchen suggested several other added functionalities, including the ability to triage appointments so that if one person missed an appointment or declined it, it would automatically be offered to another qualified person. She also suggested sending SMS messages that would inform users that they had been registered for a preset appointment instead of asking users to sign up themselves.

“Let’s put together the best minds in our city that are technology experts, because we’ve got to get this system to where it can really handle a lot,” Kitchen said.

“We’re in Austin, in Travis County, with some of the most innovative and smart tech folks in the world,” Brown said. “I’d love to see a website that reflects the potential in our community.”

According to Hayden-Howard, several of the functionalities Kitchen named are already in the works under the guidance of an outside consultant, along with general upgrades to the portal’s scheduling functionalities. An expanded call center to handle vaccine-related questions and appointments is also in the works, she said.