There is no data to support whether homelessness has increased since March, according to Austin’s Ending Community Homelessness Coalition, but ECHO executive director Matt Mollica said anecdotally, he believes the pandemic, job loss and lack of federal rent relief has led to more people locally experiencing homelessness. (Olivia Aldridge/Community Impact Newspaper)

With the number of tents on Cesar Chavez Street growing on both sides of I-35, Austin’s homelessness crisis has become more visible, experts at local nonprofits said.

The prevalence of tents is linked to the repeal of a local public camping ban in 2019 and does not necessarily indicate an increase in homelessness overall. However, Matt Mollica, the executive director of Austin’s Ending Community Homelessness Coalition, said there are many signs homelessness has risen due to the economic effects of COVID-19.

“I think, anecdotally, probably as many folks have imagined in their communities, homelessness is increasing because of the pandemic and because of job loss and the lack of [federal] rent relief,” Mollica said.

Mollica emphasized ECHO currently has no data to confirm more Austinites are homeless now than before the coronavirus pandemic. ECHO’s last point-in-time count in January recorded 2,506 Austinites experiencing homelessness, up 11% from 2019.

What is known is local nonprofits have seen a greater need from Austin’s homeless community—for food, clothing, health care and hygiene resources—since March, and they are scrambling to fill those gaps.

When the global health crisis arrived in Austin, the fallout did not hit the homeless community all at once; according to Terry Cole, the director of Austin’s Street Youth Ministry, it happened “in waves of crisis.”
RELATED STORIES

• Holiday markets, strolls, tree lightings and Trail of Lights: 18 events in the Austin area in November and December

First came a food crisis, Cole said. Street Youth Ministry, which serves young adults ages 18-28, had distributed food in the past, but it was not set up to serve hot meals out of its small space located in the basement of a church near the Drag. As need grew, the organization used grant funding and dipped into its reserve to upgrade to a more sophisticated food operation at an estimated $40,000 price tag.

“They’re cut out of support that usually helps them,” Cole said. “We did lots of suicide prevention and crisis work.” 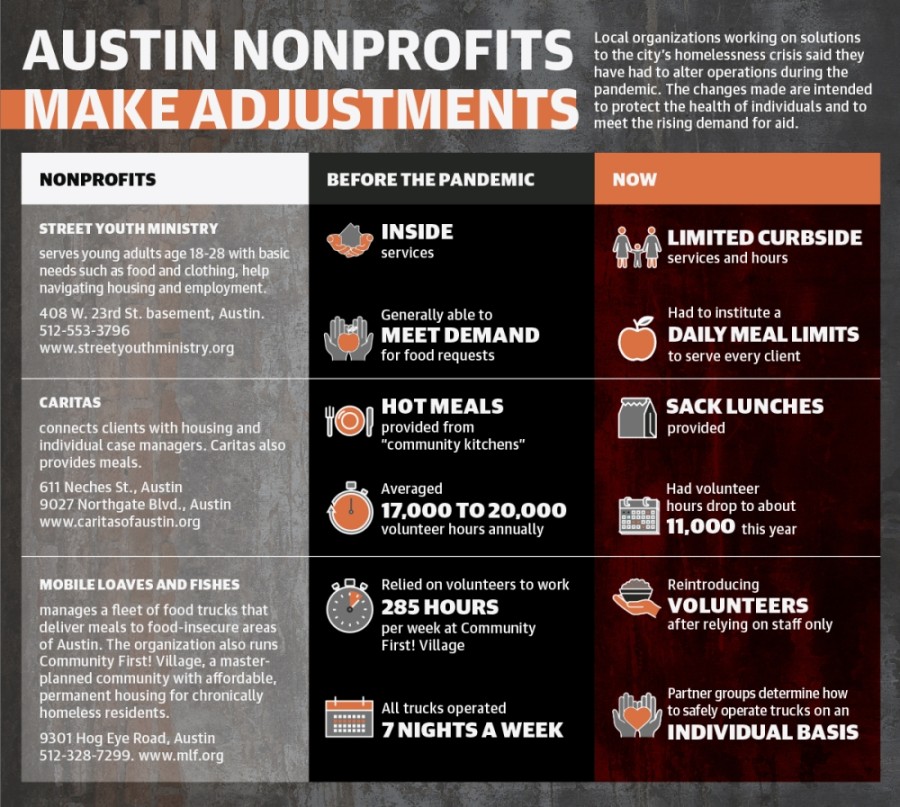 Other organizations saw similar trends. Nonprofit Caritas, for instance, saw needs rise at its two food kitchens. Serving hot meals inside was no longer a viable option due to virus transmission concerns, so it began serving sack lunches. Caritas also found mental health hurdles as it grew harder for case managers and health care providers to see clients in person.

“Everyone who comes to us has gone through some type of trauma,” Caritas Programs Officer Adelita Winchester said. “You cannot provide trauma-informed care over the phone.”

Despite the challenges, leaders of eight nonprofit organizations said they had seen little evidence of COVID-19 spreading among unsheltered clients, and most said they were more concerned about passing it to clients than receiving it from them.

But in some high-density emergency shelters, such as the Salvation Army’s downtown shelter, outbreaks did occur. According to Austin Public Health, 126 homeless residents had tested positive for COVID-19 as of Nov. 5, and 107 had recovered.

To reduce the risk to clients, shelters had to reduce capacity to maintain safety. Casa Marianella, which shelters recent immigrants and non-English speakers, is capping capacity at its adult shelter around 25, down from its usual 38, director Jennifer Long confirmed. This is another reason Mollica suspects more people have moved to the street, where the risk of an outbreak seems to be lower. 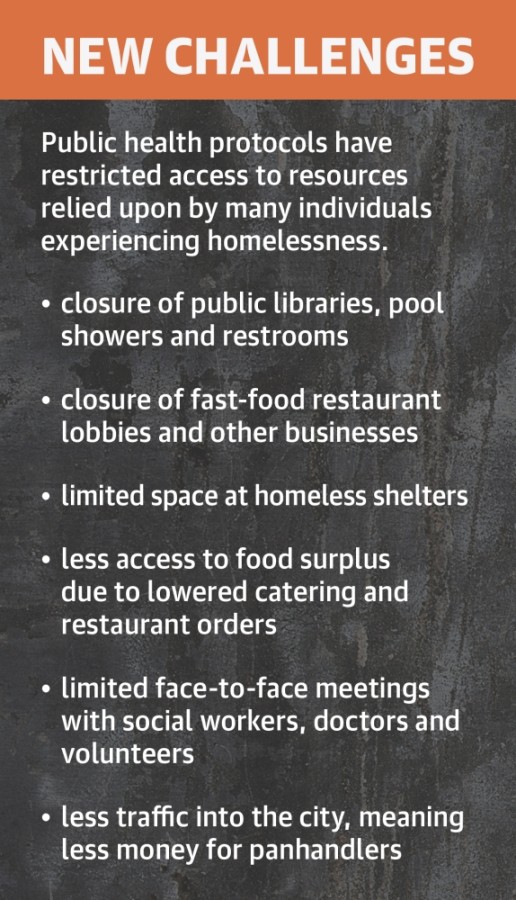 Austin and Travis County have frozen most residential evictions since the start of the pandemic. From January to March, 2,807 people were evicted, whereas there have been about 400 evictions since April, based on cases tracked by BASTA Austin, a nonprofit that works to support renters.

Cole said he anticipates a groundswell of evictions once those restrictions are lifted. The moratoriums extend through Dec. 31, but government officials could choose to renew them.

Many of Cole’s housed clients have struggled to pay rent since losing jobs this year—and those clients often have other housing-insecure acquaintances staying with them. Cole said he anticipates many of them will become homeless again.

“The eviction moratoriums have saved them so far, but you know it’s coming. There is going to be an eviction crisis. Rent is owed, and rent hasn’t been paid,” Cole said. “It’s not fair to forgive it. It’s not fair to take it away from the landowners and the apartment owners.”

Mollica said without external aid there is no way around the coming wave of evictions.

“There needs to be some federal intervention that’ll stabilize the rental crisis that we’re in right now, or else there will be mass evictions and a massive increase in people experiencing homelessness,” he said.

Some housing-insecure individuals have already seen a return to homelessness this year. After four years housed, Carlos Sandoval said he is again experiencing homelessness and has struggled amid a competitive field for pandemic assistance.

“I’ve been waiting for Texas Workforce [Commission] assistance since March when I became homeless, and I can’t even get help there because right now there are so many other people in line,” he said.

Although COVID-19 has presented significant obstacles, Amber Fogarty, the president of Mobile Loaves & Fishes, an East Austin housing and hunger relief organization, said there have been “silver linings.” She identified Austin’s Eat Apart Together Initiative—an effort that has brought around 3,770 prepared meals each week for more than 30 weeks to people in need—as one such bright spot.

“[It’s] a great example of a whole bunch of people coming together—our city government and private nonprofits coming together to ensure that people are fed,” Fogarty said. “In addition, seeing hand-washing stations and port-a-potties get out to people living on the street, that’s something that is so incredibly important.”

Providing those needed sanitation services and items in one sense has never been easier; according to Mollica, more people who live on the street remain stationary since Austin lifted its public camping ban, so service providers know where to find people to equip them with personal protective equipment and health services, things Mollica said have likely saved lives.

City officials are eyeing another possible upside: the chance to divert around 300 people experiencing homelessness—roughly 19% of the unsheltered population recorded by ECHO’s last point-in-time count—into permanent housing by year’s end.

In April, the city used federal Coronavirus Aid, Relief and Economic Security Act funds to establish five “protective lodges”—facilities for qualifying people who are vulnerable to the virus and need a temporary place to shelter. In total, 538 people experiencing homelessness have stayed in the lodges over the course of the pandemic, an Austin Public Health representative said.

The federal dollars used to fund those facilities come with an expiration date. The city must spend its funds by Dec. 30, meaning most of the lodges will close by then. But some members of Austin City Council hope to prevent the 300 homeless individuals currently residing in protective lodges from returning to the streets. At an Oct. 27 City Council work session, Council Member Ann Kitchen called it the council’s “policy and goal” to connect this group to housing.

Nicholas Cicale contributed to this report.