The city of Austin and Travis County have moved into Stage 4 coronavirus risk, local health leaders announced at a Nov. 19 news conference. The city and county had been under Stage 3 restrictions since Aug. 25, but rising case counts and COVID-19 hospital admissions have forced Austin Public Health officials to tighten restrictions.

"If we do not take the steps to change now to mitigate the risk, to flatten the curve, we could be in Stage 5 territory in just a few weeks. We must do all we can to prevent that from happening so that we can keep our businesses healthy, keep our schools healthy and keep our community healthy," said Dr. Mark Escott, Austin-Travis County interim Health Authority.

Escott had warned that restrictions could heighten for several weeks prior to the shift to Stage 4. With new cases surpassing 300 on Nov. 18; the seven-day moving average of coronavirus hospital admissions at 32; and a testing positivity rate close to 7%, he said, it was time to make the shift.

The daily average of hospital admissions is the key indicator APH uses to determine the community's risk. Until now, a seven-day moving average of 40 hospital admissions had been the trigger for Stage 4. According to Escott, a deeper understanding of the limits of local hospital staffing caused APH to reassess and make 30 admissions the threshold. With Travis County hospitals and ICUs accepting some patients from virus-burdened cities in Texas, such as El Paso, where active cases have surged well past 4,000, hospital capacity becomes an even more critical factor. 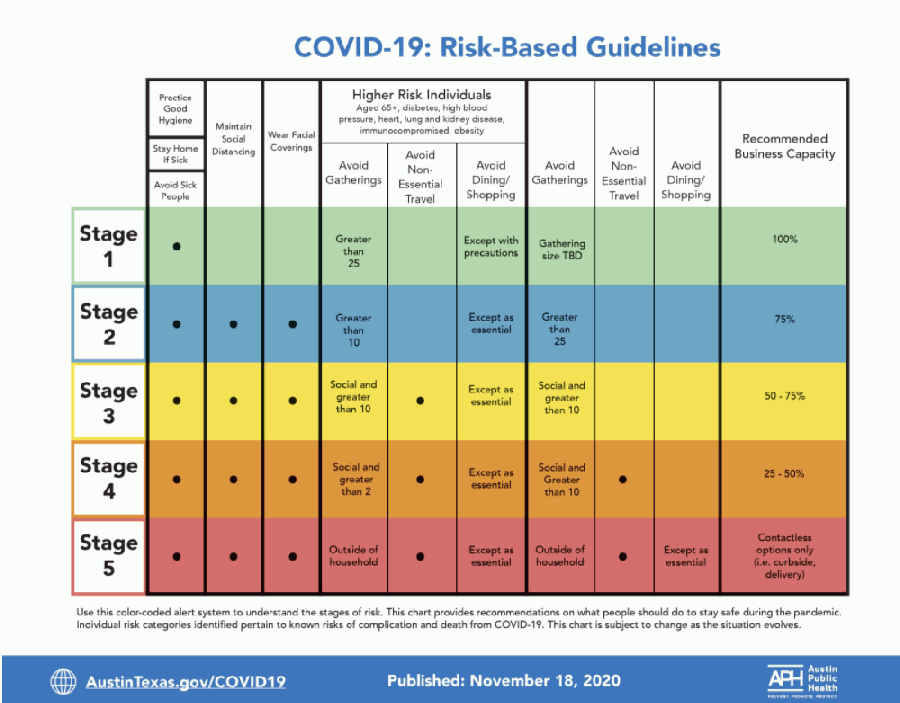 • Here's where to order Thanksgiving dinner in Central Austin

• Austin music venues at risk of closure could start applying for emergency aid within next 2 months, city says

"We can see that a surge is happening across Texas," Escott said. "The challenge is that a surge like [El Paso's] in Austin would require us to have more than 600 ICU beds and more than 2400 hospital beds just to care for the people in our jurisdiction. We don't have that many beds."

Also present at the news conference with Austin Mayor Steve Adler and Travis County Judge Andy Brown, who said they support APH's move to Stage 4. They encouraged residents to practice caution with Thanksgiving gatherings, which Escott called a "significant risk."

"Our actions are going to tell us how serious we are about whether we want to top the increase in hospitalizations. The bottom line here is we have control over our future," Adler said. "Don't jeopardize years of future holidays for you or for other Austin families by taking unnecessary risks this Thanksgiving."