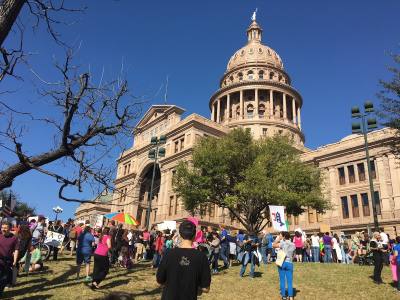 Thousands of demonstrators gathered at the Texas Capitol Jan. 21, 2017, to march for women's rights and equality.

The Texas Reproductive Rights Rally and March On Texas have partnered to host a Women's March and Rally Day on Saturday, Jan. 20, during the anniversary weekend of President Donald Trump's inauguration and the women's marches that followed it in cities throughout the world.

The day will comprise three events. An Impeachment Rally is scheduled from 10 a.m.-noon at Austin City Hall. The Resistance Choir of South Central Texas, a progressive protest group, will perform.

From noon-1 p.m., attendees will march from City Hall to the Texas State Capital and encouraged to dress as "handmaids," popularized by the TV show "The Handmaid's Tale." Former state senator and 2014 Democratic gubernatorial candidate Wendy Davis will attend the march.

Marchers will arrive at the 45th TX Roe v. Wade Rally on the south steps of the capitol. The event, held from 1-4 p.m., will focus on reproductive rights throughout Texas. Local activist groups will host information tables, and speakers will include state Rep. Donna Howard, D-Austin, and Davis.

This event is free and open to the public. More information can be found here.
SHARE THIS STORY