The first four years of a 10-year plan to boost Austin's housing stock have seen the city remain well short of its housing production goals—especially for affordable additions.

In response to an increasing population and growing affordability concerns, City Council in 2017 passed a decade-long strategic housing plan that outlined a need for 135,000 new housing units to be created in Austin by 2028. The framework also estimated that 60,000 of those spaces would need to be available at an affordable level—priced at or below 80% of the local median family income, or MFI.

After four years, Austin was not close to meeting those Strategic Housing Blueprint goals, according to an annual blueprint progress report released by the city and HousingWorks Austin Sept. 20. Only one-fourth of the 135,000 units across all price ranges had been constructed through 2021, including just 12.67% of the 60,000 affordable housing units.

“We’ve seen some progress in some of the goal categories, but when it comes to actual subsidized affordable units that have been produced, it’s not as great as we’d like to see it. Unfortunately they’re not meeting their goals for lots of various reasons," HousingWorks Austin Executive Director Nora Linares-Moeller told Community Impact Newspaper.

Even proportionally to the first four years' worth of the city's overall targets, Austin is still lagging behind with just 63% of its 2018-21 total housing production goals met, the new data showed. Including housing at an affordable level only, Austin had hit less than 32% of its four-year goals as of last year. However, more than 88% of the city's four-year goals for housing available at income levels above 80% MFI were met as of 2021.

City officials said the relatively sluggish progress on much-needed affordable housing gains was caused in part by the intensive process such construction can require.

“Realistically, the slower pace of constructing new affordable units is understandable when you consider the time and resources required to build both rental and home ownership units,” said Rosie Truelove, executive director of the Housing and Planning Department, in a statement. “We are currently looking at more than 2,000 rental and home ownership units in the construction pipeline within the next two years from funds made possible in large part by the voter-approved $250 million affordable housing bond in 2018.”

One point of progress highlighted by the city was the number of existing affordable spaces that have been maintained. The city said 3,863 affordable housing units were preserved through repairs or other upgrades as of 2021, just below the rate needed to reach its 10-year goal of 10,000. Rogers said some of the trends making new construction more expensive could have shifted some focus and funding toward "more feasible" rehabilitation work to keep current housing in place.

According to the new blueprint report, Austin's continuing split in affordable options between its east and west sides persisted in new development through 2021.

While no City Council district has kept pace with its local housing production goals, with the city labeling most as "off track," those located centrally or on the east side are closer to reaching their targets than counterparts to the west.

Only seven new affordable spaces were added in West Austin in 2021, according to HousingWorks.

Central Austin's districts 4 and 9 were the only ones not identified as "off track" in the latest report, with their 1,869 total units representing nearly 28% of the two districts' decade-long goals.

While a variety of factors, including higher land costs and development restrictions, have historically limited income-restricted housing west of MoPac, Linares-Moeller said new additions are possible and much-needed as affordability concerns persist.

“Regardless of how you feel about this, we need affordable housing everywhere in Austin. [In] West Austin, particularly, we have nothing. And workers live there, too—or they’re trying to live there," she said. "We say it and say it and say it, and we hope that one day it’s going to happen."

Across all districts, 1,619 affordable units were added in 2021 alone. District 4 saw the most new construction and surpassed its one-year production goal, while districts 2, 3, 7 and 9 each landed near or above 50% of their annual goals.

Despite the limited progress so far, the Austin and HousingWorks report suggested even more significant affordable additions are expected in the near future. The latest blueprint update said 6,961 income-restricted units are now under construction, which could boost the city's annual housing markers in the years to come.

"That 7,000 is a pretty good number; I think it’s right around what’s been produced over four years. So that’s encouraging. ... I would say that that’s a trend that’s going up," Rogers said.

HousingWorks representatives also pointed to the millions of Project Connect dollars dedicated to preventing resident displacement, the potential infusion of $350 million into Austin's affordable housing system and recent development policy changes as other factors that could stimulate more affordable housing in the near future.

"I think the community is much more aware of the affordability issue because everyone is feeling the affordability issue with the increase in rents and mortgage prices and all that kind of stuff," Linares-Moeller said. "We have some movement that we see, and we’re hoping that putting all of that together will help put more units on the ground. Time will tell, obviously, but I think everyone that’s in this world is really sort of working toward that." 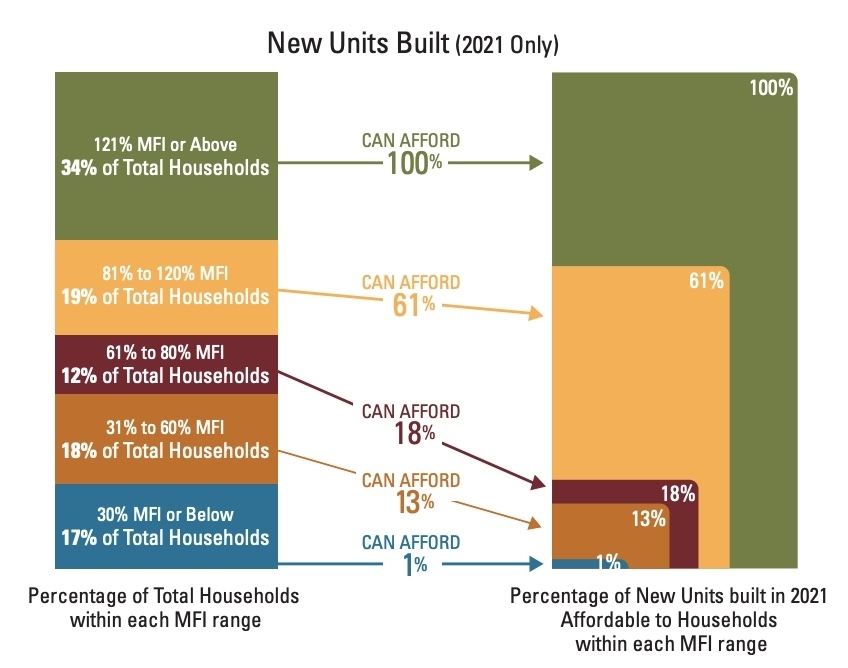