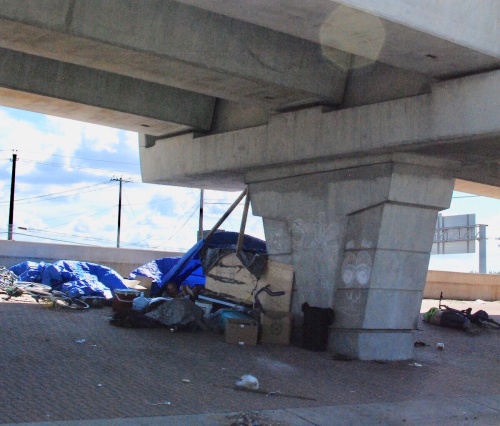 Homeless encampments are common under highway overpasses, such as this one seen under the Hwy. 71 overpass near I-35 on July 11.

After City Council relaxed its public camping laws in a gesture toward its homeless community, city of Austin contractors, with Austin police officers present, were seen clearing homeless camps under the I-35 overpass at Hwy. 71 earlier this week.

A 72-hour notice of the clean-up was posted in the area and drawstring bags were provided so those camping could collect their personal items. Citations for camping were not handed out, nor was anyone forced to leave the area. However, anything remaining in the area that could not fit in the drawstring bags, such as tents, mattresses, other furniture or big items, was cleared away, as well as trash and other debris.

These monthly clean ups have happened for years; however, this week’s job marked the first since Austin City Council voted to relax public camping laws on June 20, and only the third since the Texas Department of Transportation, or TxDOT, foisted cleaning responsibilities upon the city earlier this year.

A similar process has or will take place in the 60-65 marked areas directly under state highway overpasses and bridges including all areas within the city under Hwy. 183, Rte. 290, I-35, and Hwy. 71, said Kyle Carvell, spokesperson for the city’s public works department. Public works manages the contract with the cleaning crew, Relief Enterprise Inc.

“This is not a process intended to address homelessness,” Carvell wrote in an email. “The intent is to ensure the public [right of way] is safe and free of hazardous debris and items.”

Carvell emphasized that the cleanups do not include removing people from the area, only “solid waste and debris” and anything else that cannot fit into the drawstring bags.

TxDOT began the cleanups a few years ago after state bridge inspections became difficult because of the growth of homeless encampments underneath the overpasses and the resulting amount of debris, said Chris Bishop, spokesperson for TxDOT. Bishop said the cleanups became too expensive and the state needed to put the funds elsewhere, so conversations began around the city taking over the responsibility.

Although the state started the cleanups, Bishop said it was always the city's responsibility, under the terms of a municipal maintenance agreement dating back to 1986. The city officially took over cleaning duties in the spring.

District 5 Council Member Ann Kitchen, whose district surrounds the area at I-35 and Hwy. 71, said that, although no one was being removed or cited for camping, the cleanups appeared antithetical to the intent of the relaxed ordinance.

District 4 Council Member Greg Casar, who led Austin City Council’s push to relax the public camping ordinance, acknowledged there is still much work ahead in addressing the city's homelessness issue, and said the mayor, city council and city manager are working to provide lockers and storage areas for people's possessions. Although Casar said maintaining the health and safety of the city is important, the city should not disregard the well-being of the homeless community.

"Moving forward, we need to make sure we keep all of our health and safety rules intact while minimizing any harm to people already in poverty," Casar said in a text message. "That philosophy should also apply to these contracts [for] cleaning our public spaces."

City staff is expected to bring back recommendations in late August on areas the city could encourage the homeless community to safely camp. Kitchen said she thought that could bring some clarity regarding the cleanups; however, she said she could not comment further as she was on vacation and has not spoken to city staff.

Multiple attempts to reach the Austin Police Department for comment prior to publication were unsuccessful. Community Impact Newspaper also reached out to a handful of groups, including Just Liberty and Grassroots Leadership, who advocated for the change to the public camping ordinance; however, neither group could provide clarity on the cleanups.
SHARE THIS STORY