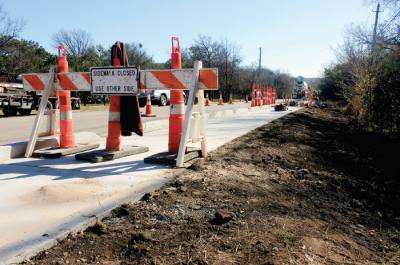 City construction of new sidewalks and a shared-use path on Adelphi Lane in Northwest Austin is from December 2018.

An audit released earlier this week on Austin’s sidewalk deficiencies sparked reports Austin only has enough money to fund roughly 3% of its needed 2,580 miles of sidewalk; however, officials said more is being done to build sidewalks throughout the city than the audit showed.

The audit, headed by city auditor Kelsey Thompson, showed the $37.5 million allocated through the voter-approved 2016 mobility bond is ahead of schedule in meeting its mission to build between 40 and 60 miles of the city’s highest priority 580 sidewalk miles, or roughly 10%. Priority is determined by a multitude of factors, such as proximity to schools, bus stops, hospitals and employers, as well as population density, according to Kyle Carvell, a spokesperson for the Austin Public Works Department.

Although it was the only metric offered by the report, officials said the nearly $40 million 2016 mobility bond allocation is not the only mechanism through which the city is making a dent on its sidewalk needs. The audit lacked data on how many miles of new sidewalk have been produced through the 2016 mobility bond’s corridor reconstruction program, as well as how many of miles of new sidewalk have been the result of private development and redevelopment, or how much the Texas Department of Transportation has contributed through state projects.

District 6 Council Member Jimmy Flannigan, a member of the council’s Audit and Finance Committee, which received the report May 31, said his takeaway from the report was “mostly positive.” He said it is no surprise the city needs more sidewalks and that they are expensive to build. However, he said the notion that only 3% of the city’s needed sidewalks are being funded is incomplete, as the amount of developer-produced sidewalks is unknown.

Flannigan said, in his view, private development and redevelopment is where the city should receive a lot of its sidewalk construction anyway.

Mayor Steve Adler, who aggressively campaigned the 2016 mobility bond, said the numbers were not a surprise and called the city’s construction of 10% of the highest priority sidewalks a “pretty good effort.” But Adler emphasized the number does not include those built through the corridor program or private projects.

Adler said the city’s lack of sidewalks owes itself to a historic lack of policy around sidewalk requirements, something the city has tried to fix in its land development code through building and safe street standards.

“I wish we had the rules in place for the entire time in Austin; this is a huge problem born out of decades of not requiring sidewalks,” Adler said. “We’re finally doing something about it. We’ve done more in the last four years than any other four-year period in the city’s history.”

Adler said whether the city should carry more responsibility to provide sidewalks than private developers is a hard question to answer. The responsibility of retrofitting already built-out sections of the city with sidewalks would fall on the city, he said, as little development occurs in those areas. However, new subdivisions and major developments need to meet existing health and safety requirements, which often include the addition of sidewalks.

“My hope is that the city makes sure we’re not falling further behind and that we don’t have development in the future that doesn’t include sidewalks,” Adler said. “We can’t have development dig us in a deeper hole and we [the city], over time, need to fix the areas that need to be fixed and focus on areas of the greatest need.”
SHARE THIS STORY