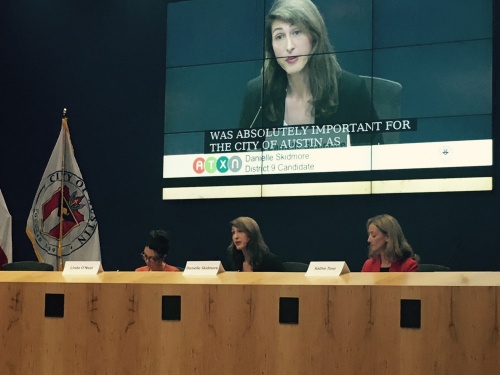 Austin’s housing and affordability crises are acutely felt in Central Austin, where housing demand continues to grow, and on Thursday three candidates actively campaigning to represent District 9 on City Council separated themselves on how to address the housing crisis.

Incumbent Kathie Tovo and challengers Linda O’Neal and Danielle Skidmore ran through their platforms on various issues during Thursday’s League of Women Voters candidate forum, from traffic and policing to cultural diversity and homelessness; however, when it came to following up on CodeNEXT, the city’s failed attempt to rewrite its land development code, and addressing the city’s housing problem—arguably the district and the city’s most pressing issue—the candidates provided contrasting answers.

Tovo said Austin needs to focus on sticking with the direction of Imagine Austin—the city’s 30-year comprehensive plan—which focused on compact and connected development while respecting the character of Austin’s existing neighborhoods.

She criticized CodeNEXT, saying it would have substantially changed many of these neighborhoods and overturned long-standing neighborhood plans. She said any further attempts to rewrite the land development code should drive density along the city’s transit corridors and activity centers.

Skidmore, a transportation engineer who has drawn support from the urbanist community, said the failure of CodeNEXT was tied to a failure by City Council to lead. She agreed that stewardship of Imagine Austin is paramount to a successful rewrite of the land development code; however, she said more was needed than narrowing density along only transit corridors and activity centers.

Skidmore said the city has to, and “absolutely” has the ability to, find space for density throughout Austin’s neighborhoods in order to meet the recommendations of the city’s Strategic Housing Blueprint, which calls on the city to develop over 135,000 housing units by 2027. Skidmore stressed the need to use the blueprint as a guide for development.

O’Neal said the hyperbole used by opposing groups in the CodeNEXT battle helped thwart any potential progress in the city’s housing needs. The local high school teacher said each neighborhood has its own set of needs and the city needs to do a better job of listening and customizing solutions.