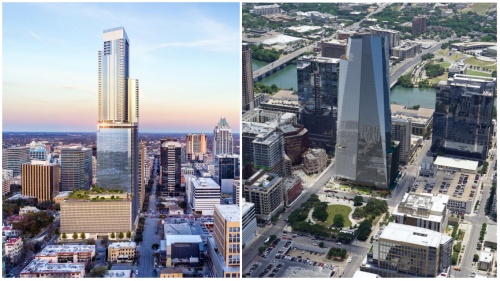 The 6th + Guadalupe tower (left) would stand at 837 feet and The Republic would reach 708 feet high. They would be the two tallest towers in Austin.

If the projects earn final approval, they would each eclipse Austin’s current tallest building, The Independent at 801 W. Fifth St., which stands at 685 feet.

The applicant, represented by local lobbying firm Drenner Group, is seeking an additional entitlement of 565,100 square feet through the city’s density bonus program. In lieu of including on-site affordable housing, the applicant has proposed to pay $2.7 million into the city’s housing trust fund.

The Republic, designed by Duda Paine Architects, the North Carolina firm that produced the Frost Bank Tower, is proposed to take over the existing 77,200-square-foot surface-level parking lot at the southwest corner of Fourth and Guadalupe streets and directly across the street from Republic Square. The project will include 901,300 square feet of office space and 19,200 square feet of retail space.