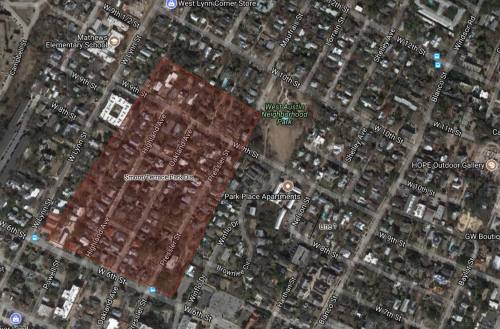 The Smoot Terrace Park section of Clarksville sits between Sixth and Ninth streets.

Neighbors appear at odds with each other as Austin City Council considers implementing tighter development restrictions in a section of Clarksville through the creation of a local historic district.

The Smoot Terrace Park section of the Clarksville neighborhood in Central Austin covers 17.5 acres between Sixth and Ninth streets. According to staff from the city’s historic preservation office, some houses date back to the late 19th century and some of the area contributes to the West Line Historic District, added to the National Register of Historic Places in the early 2000s.

However, unlike local historic districts, national register designation is honorary and does not place tighter restrictions on existing structures, new development or demolitions, said Cara Bertron from the city’s historic preservation office.

As Austin City Council considers the creation of the local historic district, the proposal has polarized property owners in the area.

Supporters say the district represents an opportunity to crystallize the diverse, physical characteristics of the neighborhood, where housing types range from single-family homes and condos to the rare triplex and fourplex structures remaining from an earlier epoch in Austin’s development history.

Residents like Scott Marks said a local historic designation would create a safeguard for the area’s older structures, which have been getting demolished and replaced by large, single-family homes.

“Our neighborhood has a lot of diversity; a lot of us will [say] … that’s why we moved to this neighborhood,” Marks said. “The reason that this local historic district is important is to preserve that diversity and preserve the density that exists.”

Objectors claim the neighborhood has seen too many changes for historic consideration and the restrictions would be a burden for those who want to renovate or add onto their homes.

Homeowner Linda Cangelosi said the effect on property owners would be inconsistent. Out of 102 buildings in the neighborhood, 67 contribute to the historic nature of the area. She said non-contributing homes are exempt from the penalties of not maintaining the historic character of the structure. The penalties make it more difficult to add on or renovate a home, Cangelosi said.

“This is a down-zoning we cannot afford,” said Cangelosi, whose home would be considered historic. “It’s unfair to make us live as second-class citizens in our own neighborhood.”

Cangelosi represents the 35 percent of property owners who filed a petition opposing the historic district. The petition means it will take a three-fourths supermajority approval when City Council takes its final vote on the proposal.

Austin City Council will take up the item again in June. Mayor Pro Tem Kathie Tovo, the council representative for the area, said she supports the proposal.

“I think it’s a very strong local historic district and I hope it will get the support it needs from council to be recognized as such,” Tovo said.