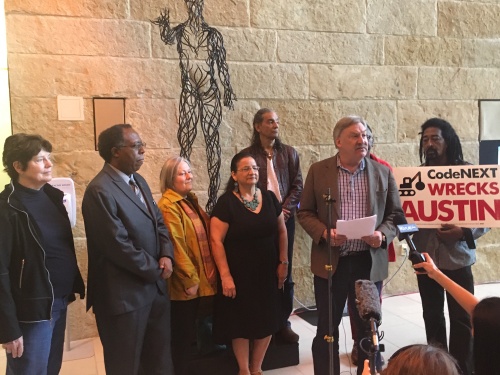 The city clerk validated a petition Monday requesting that revisions of the city’s land development code, including CodeNEXT, be subject to a public vote.

The petition, which was submitted in March, includes more than 31,000 signatures.

According to the city charter and state law, a sufficient petition must include the signatures of 5 percent of or 20,000 qualified voters in the city, whichever number is smaller.

The city conducted an analysis of the petition and estimates that nearly 26,000 of its signatures are valid. In a report on this analysis, the city said it was “virtually certain that the true number exceeds 20,000.”

Now that the petition has been validated, City Council may either enact the legislation called for in the petition, which would allow Austin residents to vote on comprehensive rewrites of the land development code, or put it to a public vote in November.

Community Impact Newspaper previously reported on the petition March 29, noting that it raises questions about equity in the city's decision-making process.

Elected officials have called the code rewrite necessary to allow Austin to manage it accelerating population growth, but CodeNEXT has received constant criticism from across the political spectrum during the ongoing, five-year, $8.5 million process.

A land development code lays out the regulatory blueprint for how land can be used and built upon in a city. It informs property owners of what they can and cannot do on their property.

The months-long grassroots campaign to give citizens, rather than council members, voting power on the product was led by the political action committee Let Us Vote Austin and IndyAustin. It received support from groups like the Austin Neighborhoods Council and the local NAACP chapter.

“I don’t care whether you like CodeNEXT… we’re here today to say that people have the right to vote on it,” Fred Lewis, Let Us Vote Austin’s treasurer, said at a March 29 press conference. “CodeNEXT affects everyone’s life in this city… everyone’s property. The people have a right to decide the fate of their future.”