Council Member Kathie Tovo may need approval of over 3,500 voters in her downtown district to run for re-election 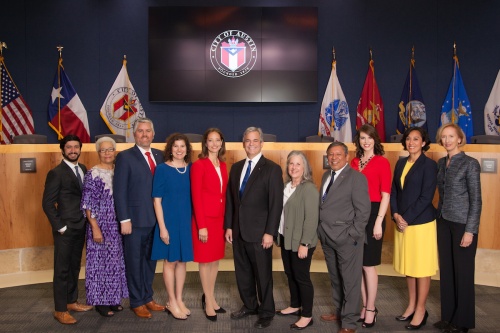 Mayor Pro Tem Kathie Tovo, fifth from left, may need to gain approval from more than 3,500 District 9 voters to be eligible for November's city council election.

In November, Tovo will look to earn her second consecutive full term under the council's current format.

In 2014, Austin went from a nongeographic system of city council representation, or at-large, to having 10 geographic districts. Because the City Council has 10 members and a mayor, it is known as the 10-1 system.

Although Tovo is vying for her second consecutive 10-1 term, it would be her third consecutive term overall, as she was the lone council member to sit on the ultimate edition of the at-large council system and earn re-election to the initial 10-1 body.

According to the city’s charter, mayors and council members are limited to two consecutive terms on the dais. However, if a candidate wants another term, they must submit their candidacy application with a petition signed by 5 percent of the eligible voters “of the territory from which the office is elected.”

According to the City Clerk’s Office, there were 70,322 eligible voters in District 9 as of Dec. 31. Five percent would amount to just over 3,500 voters.

Talking to Community Impact Newspaper on Thursday, Tovo said there are differing opinions on how term limits affect her position. She said the District 9 council member position technically did not exist prior to the formation of the 10-1 system, which is the seat she is targeting for a second consecutive term.

Although there has not been an official legal opinion on how term limits may affect her candidacy, Tovo said she is taking the conservative route: She has a team of roughly two dozen volunteers that has been collecting signatures since late January. Tovo said she has already seen “overwhelming support” and has set a goal of 5,000 signatures.

The window to file for candidacy for the November election is between July 23 and Aug. 20. Tovo said she expects to file right near the beginning, as the signatures only remain valid for six months.