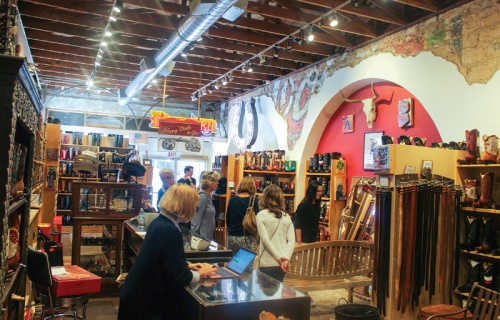 To the untrained eye it can be difficult to distinguish the small touches that create a high-quality cowboy boot. But as Jerry Ryan, owner of Heritage Boot Co., turns a pair of leather boots over in his hands, the fine details that define the final product come into focus.

Ryan points out the single-needle stitching that creates the pattern on the leather. He flips the boot over and points out the lemonwood pegs holding the sole in place—better, he says, than the painted brass nails sometimes used. The leather, he points out, has no plastic coating. It is all handmade from a third-generation bootmaker in Leon, Mexico, who produces about 20 pairs of boots a day—Ryan keeps the bootmaker’s name private to protect his designs.

Ryan has run Heritage Boot along with his wife, Patti, since 2007. The spot is one of many boot stores around the city, but the Ryans say each individual shop has its own niche of customers. Heritage Boot appeals to those who are looking for a hand-designed boot and will pay for the quality. Heritage Boot prices range between $450 and $1,300 for a pair, according to the store’s website.

Heritage Boot’s style reaches back into history to boots as they were designed in the 1940s, ’50s and ’60s, when there was no mass production, and as Ryan said, “there was a bootmaker in every little town in Texas.”

About half of Heritage Boot’s business comes from locals, and half comes from out of town. Customers cannot order boots online, but they can browse available pairs, then call the store. Patti said Australia is the most popular country outside the U.S. for shipping orders, largely because word of mouth has spread among shoppers there.

Ryan grew up in Dublin, Ireland and worked in the clothing and footwear business around the world before moving to Austin with Patti and opening the store in February 2007. Before making the move to Texas, the couple met in the 1990s in San Francisco.

Patti still remembers a specific detail about the day they met: Jerry was wearing cowboy boots.