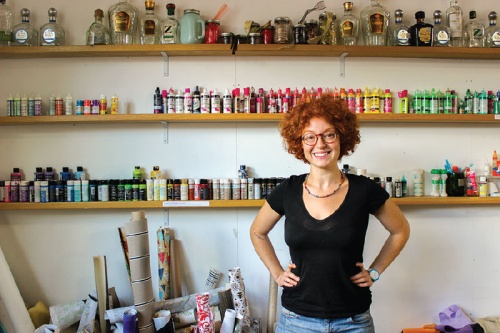 A visit to Craft is like u201ckaraoke of visual art. You donu2019t go to karaoke to record an album. You go to have fun.u201dn u2014Eli Winkelman, nOwner of Craft

“The basic idea is ‘everybody’s craft room.’ So when you want to make something, instead of going out and buying a bunch of stuff you don’t need, you can come here, and it’s $10 an hour to use our stuff,” Winkelman said. “That way you avoid the burden of going to the art store to buy a hundred googly eyes in a package when you only need two.”

Since then, Craft has grown to employ two more people and hosts a roster of local artists and entrepreneurs who lead workshops on chocolate making, embroidery, glitter painting and more.

The business is for adults only—everyone from couples on a date night to teenage birthday parties—and emphasizes play over proficiency.

“We definitely have to give people pep talks,” Winkelman said. “Your task here is not make something beautiful, but to turn off the voice that’s worried about that.”

A visit to Craft is like “karaoke of visual art,” she said. “You don’t go to karaoke to record an album. You go to have fun.”

Winkelman encourages customers to drop in, snack and bring supplies.

“In your own craft room, you just show up when you want,” she said.

Despite the relaxed atmosphere, Winkelman has had to learn how to keep a business afloat amid permitting requirements, tax bills and zoning limitations.

“Passion isn’t enough,” she said. “You really need to be organized and have good administration of everything.”

In 2016, Craft relocated from its original spot on South First Street to a larger space in East Austin that used to house art studios and warehouses, calling back the area’s industrial past.

Today, Winkelman is focused on supporting the local arts community through Craft and devising ways to bring the concept to more people.

“I wish I could go to the art store and use everything and not have to buy all of it,” she said.